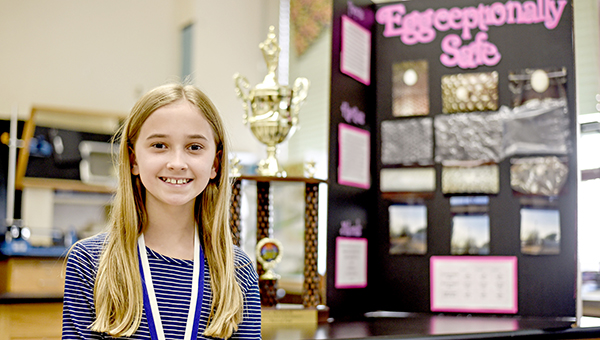 Adalyn Reece Anderson poses for a photo in front of her 1st place project in the 2017 MSEF Region II Science Fair at and also best Overall at Jackson State University. Anderson's project was Eggceptionally Safe, where she tested three different types of bubble wrap's ability to keep an egg wrapped in three feet of bubble wrap and dropped from 25 feet safe. (Courtland Wells/Vicksburg Post)

Anderson won first place in the engineering division for grades four through six and the top overall prize for her age group at the fair.

For her project, Anderson tested three different types of bubble wrap and their ability to keep an egg from cracking when dropped for a height of 25 feet. She tested what she called “standard,” “medium,” and “bulky” wraps.

“We tested them three times each,” Anderson said. “The first time with the standard sized one, it cracked on impact. It was a lot of tiny bubbles, but I guess it didn’t have enough cushion for it to land safely.”

The next two times had the same result with the egg cracking on impact. It was then time to try the medium sized bubble wrap, which Anderson’s hypotheses predicted would be the most effective.

“My hypothesis was that the more medium sized one was going to work better, because it looked more cushiony and was blown up a little bigger than what the standard sized one we usually use is,” Anderson said.

Her hypothesis quickly proved to be on point as the egg survived all three of its falls when wrapped in the medium sized wrap. All that was left was to test the largest bubble wrap. It proved to be the least protective as the egg fell out all three times and cracked.

Anderson placed in both the school and district science fairs before bringing home all the hardware from the district competition.

“At the end, we were about to leave because I have never really gotten this before,” Anderson said.

“I usually placed in JSU, but other people have gotten this.”

She didn’t realize that she had won at first because they mispronounced her name, and even after confirming it was her, she still found it hard to believe.

“I felt like I was in shock,” Anderson said. “When I got on stage, everything felt a little dizzy at the moment. When I was leaving, I was like this is just a dream. I am going to wake up in a moment and we are going to have to redo this and I’m not going to get anything.”

It wasn’t a dream though, and she has the medal and trophy to prove it.

Spring is in the air: Despite weather, day of fun at air foundation goes off without a hitch

Not even few rain showers and an overcast day could deter the Southern Heritage Air Foundation during its Spring is... read more