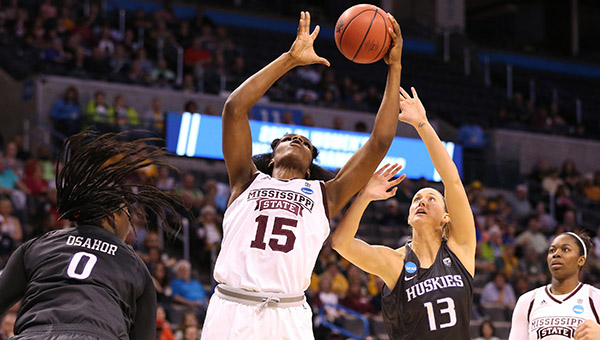 Bulldogs on to the Elite Eight

Her teammates told her to take over and she listened. She scored 20 of her career-high 26 points in the fourth quarter, and the Bulldogs defeated Washington 75-64 on Friday night to advance to the NCAA Women’s Tournament’s Elite Eight for the first time.

“They said, ‘T, you’ve got to dominate,’” McCowan said. “Just taking that in, listening to my teammates, knowing I had to step up, take my team, like, further. That’s when I had the look in my eye like, ‘Nobody can stop you.’”

McCowan, a 6-foot-7 sophomore who entered the game averaging just over eight points per game, made 9 of 10 field goals in the final 10 minutes. She scored 11 points in the first 2:33 of the fourth quarter to turn a two-point deficit into a seven-point lead for the second-seeded Bulldogs (32-4).

McCowan also had 12 rebounds and a career-high six blocks, and now the Bulldogs have reached a new level. Mississippi State coach Vic Schaefer said his team is getting overlooked.

“They’re not getting a lot of credit right now,” he said. “That’s fine. You know what? We’ll fly under the radar the whole way if we have to.”

“They shadowed me with the big player,” Plum said. “They switched plays, hedged screens. Credit to them. They had a great defensive game plan. You know, I didn’t make shots, just throughout the game, which I usually do.”

Schaefer said slowing her down was a chore, but Dominique Dillingham, an All-SEC defensive player, helped a key role.

Mississippi State led 38-29 at halftime. Plum exploded for 10 points in the third quarter, and the defense picked up to help Washington take a 50-48 lead into the final period before McCowan took over.

“I’m so grateful to have been able to go to the University of Washington,” she said. “You know, when I first came on campus, I had big dreams, dreams for our program, dreams as an individual. A lot of them came true.”