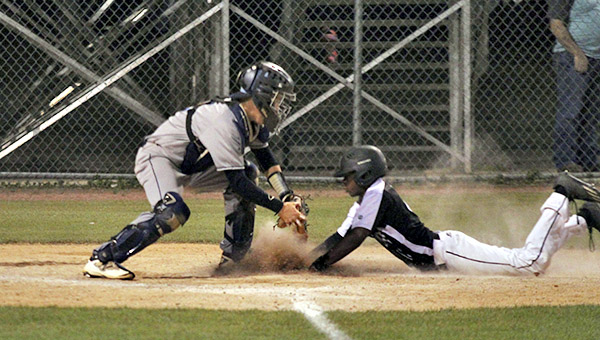 Moral victories are never the best, but Friday’s was a welcome one for Vicksburg High.

Ridgeland scored six runs in the top of the first inning and went on to win 9-3 against the Gators in a Division 4-5A game at Bazinsky Field.

After losing two games earlier in the week by a combined score of 32-2, holding the line after a rough start and showing some fight was an encouraging sight for VHS coach Derrick DeWald.

Vicksburg had lost to Clinton and Ridgeland on Monday and Tuesday, respectively, by identical 16-1 scores.

“We grinded for seven innings and had a chance at the end. We played a lot better, and that was the main thing after those two debacles on Monday and Tuesday,” DeWald said. “I’m proud of the way we played.”

Chandler Luke pitched six strong innings for the Gators. He gave up the six-spot in the first inning, but settled in after that to give his team a chance to get back in it. Vicksburg (3-9, 0-4 Division 4-5A) cut it to 6-2 at one point, but left six runners in scoring position.

Chris Farrish was 2-for-4 with a run scored for the Gators.

“We just did a better job all the way around. We had seven or eight hits, we just left runners on,” DeWald said.
Vicksburg is scheduled to host Natchez on Saturday, weather permitting. The junior varsity game will begin at noon at Bazinsky Field, and the varsity at 2 p.m.

Caleb Sterling drove in three runs, Matthew Newcomb drove in two, and Sean Daily was 2-for-4 with two RBIs and a run scored as Warren Central (9-6, 4-0 Division 4-6A) beat Greenville for the second time in four days.

Newcomb brought in WC’s first run with a bases-loaded walk in the first inning, and Sterling followed with a two-run single. Daily added a sacrifice fly to stake the Vikings to a 4-0 lead, and they were never seriously challenged.

WC added three runs in the fourth inning to make it 7-1, and scored in each of the last four innings to stay comfortably in front.

Logan Stewart started on the mound and went five innings, allowing three runs, three hits and three walks. He struck out seven. Christian Oakes worked the last two innings and gave up two hits, no earned runs or walks, and struck out three.

Warren Central will host Brandon Saturday at 1 p.m., and then Clinton Tuesday at 7 in a key Division 4-6A game.

Porters Chapel Academy (14-9, 0-2 District 5-AA) got off to a rough start in its district schedule, losing to Franklin Academy for the second time this week.

Franklin scored eight runs in the fourth inning to blow the game open.

Bradley McCullough had a single and drove in a run with a sacrifice fly for PCA.

The Eagles are scheduled to play at Canton Academy Saturday at 1 p.m., and then will host Rebul Academy Monday at 6 p.m. After that, they have a home-and-home series with District 5-AA opponent Clinton Christian. Tuesday’s game is in Clinton and Friday’s is at PCA.

“No doubt that hurts, but we still control our own fate. Still got a lot to play for, and eight more conference games to play,” PCA coach Wade Patrick said.