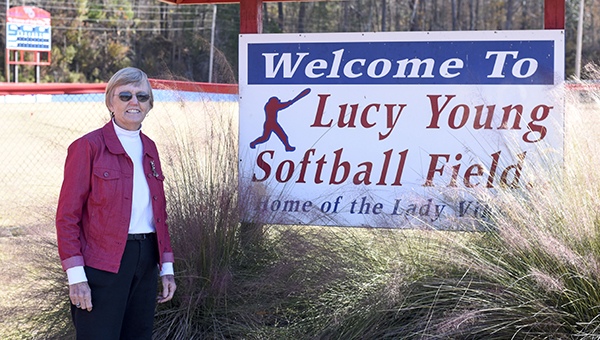 Lucy Young stands by the Warren Central softball field that bears her name. Young was a teacher and coach for 37 years. (Courtland Wells-Vicksburg Post)

For 37 years, Lucy Young had an identity as a teacher and a coach. She was a fixture at Warren Central, both as a physical education teacher and the leader of the school’s softball and soccer programs.

“I’ll always be Coach Young,” she says with a smile, “and I cherish that title.”

Upon her retirement in 2010, however, Young set out to forge a new identity — volunteer extraordinaire. Over the past seven years she has dived into volunteer work with Area 10 Special Olympics through her church at Hawkins Methodist, and with some continuing projects at Warren Central.

“I was so happy to get this job, and I can honestly say I left happy. I wanted to do so many other things,” Young said. “I did not want my life defined by coaching.”

During her long career at Warren Central, Young certainly was that. She arrived at the school in 1973 as a 21-year-old fresh out of Mississippi State and stayed until her retirement nearly four decades later.

Young was the first coach of WC’s boys’ soccer and girls’ softball teams and led those programs for about 20 and 30 years, respectively. Between teaching and coaching, she said she’s lost count of how many students she crossed paths with over the years.

“I dare say I’ve had a student in every profession you can name,” Young said.

Some of those became doctors and lawyers, mechanics and policemen. Others, like Jennifer Ray Cain, followed Young into teaching. Cain, a 1999 graduate of Warren Central, played soccer and softball for Young when she was a student. Now she’s following in her footsteps as a special education teacher.

“Being a teacher now and working with Special Olympics, I never realized what an impact she did have on the community and the students and everybody’s life she’s ever touched. She impacts everybody she comes in contact with,” Cain said. “Working here now you see how much she did and how many hours she put in just being here. She’s worked tirelessly all the time making sure every event is special and organized. I think anybody here in the building that has worked with or played for her, she’s the one you want to be like.”

“It’s probably one of the highlights of my teaching career,” Young said of the prom. “We decided we’d have a dance, and decided to do it during the day because so many of those students didn’t have transportation or the means to come to one at night. From there it has grown and grown. It seems like it has grown every year.”

Last year, Young said, 70 couples were introduced during the Special Prom’s lead out. To help stage the event, as well as Special Olympics events throughout the year, Young got Warren Central’s students involved.

“It’s drawing in those volunteers, students and adults. For many students it was their first exposure to their classmates that had special challenges,” Young said. “Now those are adults that are out there working with the different civic groups like Kiwanis and Rotary and doing good things in the community.”

The ripple effect of not just doing good works, but showing others the joy of doing them and encouraging them to pay it forward is at the heart of Young’s being.

“My whole life is a blessing. People talk about volunteering, but I grew up in that environment of giving and helping people,” Young said. “When I retired I said I just want to do useful things. I have been trying to do that.”

Since retiring Young has continued her work with the Special Olympics and Special Prom. She’s also worked with Hawkins Methodist’s food pantry and its membership care program that reaches out to those unable to attend church. She volunteers for the church’s drive through prayer program once a month, and every summer does a week of mission work.

There are other things, she hints, that she doesn’t want anybody to know about.

“It takes away from the doing,” she said.

Her good works, however, are felt throughout the community. Whether it’s the person she helps at the food pantry, the Special Olympian she spurred on to great heights, or her former students also doing good works, her influence is felt far and wide.

“It’s always been my goal to have a positive impact. To care about things, to show kindness and go outside yourself and your comfort zone and do things that will hopefully make life better for somebody,” Young said, adding that she is simply one of many in Vicksburg striving toward the same goal.