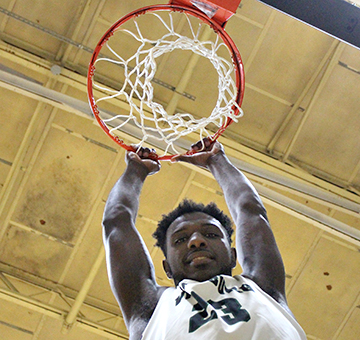 From the time he eased into Vicksburg High’s lineup as a freshman, Kirk Parker has carried the weight of expectations.

The 6-foot-5 forward was tabbed by coach Dellie C. Robinson as the program’s next great player. A talented forward with a deft scoring touch in the post, Parker was the kind of player winning teams are built around.
For several years, those expectations never turned into reality.

As a freshman, Parker was a role player on a guard-oriented team that reached the Class 5A championship game. He averaged 10.4 points and 8.6 rebounds per game as a sophomore, but the rebuilding Gators struggled as a team.

An elbow injury suffered while playing football and then aggravated shortly after his return to the basketball court all but scuttled his junior year.

As a senior, however, it all came together. He averaged a double-double — 13.6 points and 10.5 rebounds — and the Gators had a great season as a team. They finished 19-10 and reached the second round of the Class 5A state tournament.

Parker was finally the player the team revolved around, the difference-maker he and everyone in the program knew he could be. And now, he’s also the best player in Warren County.

Parker is the 2017 Vicksburg Post boys basketball Player of the Year.

“I put the work in every day and practiced hard to get in that position. I did it for the team and for Coach (Robinson) and for my mom (Catherine Jones),” Parker said. He also thanked others who helped him achieve great heights. “I want to thank the community and everybody at Vicksburg High, and all my supporters through the years. It’s been an honor and a blessing to play at Vicksburg High, and I’ll always be a Gator.”

Parker’s high school career began at the tail end of an impressive run of individual and team success for VHS.
In the decade before he got to Drummond Street, the program had seen players like Jonathan Phelps, Mychal Ammons, Kelsey Howard and D’Angelo Richardson gain statewide recognition and lead the team as far as the state championship game.

Parker seemed like the next link in that chain. After playing a supporting role on the 2013-14 team that lost to Callaway in the Class 5A final, the Gators started rebuilding around him the following year.

Kelvin Carter, who has coached in the program for nearly two decades, said he’s been impressed with the way Parker handled those expectations.

“He’s been mature beyond his years. He’s been a leader on and off the floor. He’s had the biggest shoes to fill, probably, since Mychal Ammons. He’s just a tremendous kid,” Carter said. Ammons led VHS to the Class 6A title game in 2011. “The expectations he had to live up to, he exceeded it. He welcomes the challenge every day he wakes up. He works extremely hard.”

He scored in double figures in 10 of the team’s first 12 games while carrying the Gators through the early part of the schedule. As other players emerged as scoring threats during the course of the season he was happy to play a complementary role, but was still there in crunch time or whenever the team needed him to step up.

“I felt like I had to put the weight on my shoulders,” Parker said. “I was never selfish, but I knew they were going to need me for big plays. I had to take on that role.”

Parker’s role, quite simply, was to dominate the paint. He shot 72 percent from the field this season, mostly because he rarely took a shot farther than 8 feet from the basket. He didn’t shoot a 3-pointer during his entire high school career.

He said that he can shoot jumpers, but simply didn’t need to. Between his solid post game and teammates who were better shooters, he knew his role was to play down low, clean up the misses, and draw attention from defenders to open up shots for others.

“It (outside shooting) is part of my game. I don’t use it because I try to let my teammates have some. I mostly do the dirty work,” Parker said.

Carter confirmed that Parker’s jump shot is real, even if sightings of it are rare.

“He’s been working on a 14-, 15-footer. I think he may have taken two or three jump shots the whole season, but he has a nice shot,” Carter said. “He stepped out and took one in the district tournament against Neshoba Central and it was like, ‘Whoa, what was that?’”

Developing a reliable jumper will be an important part of Parker’s work this summer. He has a few college offers from Alcorn State, Mississippi Valley State, Delta State and some junior colleges, and is still trying to settle on one.

While he had success in the post against some of the state’s best teams, however, he’d be a few inches shorter than most college power forwards. Even with a strong post game, he knows he needs to expand his repertoire to fit the role most college teams will need him to play.

“I’ve got to put in the work every day,” he said. “I have to polish the rest of my game and my outside ability. I am small for a big man, so I have to stretch it to the wings.”

After each game this season, Jackie Martin-Glass would gather the Warren Central Lady Vikes in the locker room for a... read more