Spring is in the air: Despite weather, day of fun at air foundation goes off without a hitch 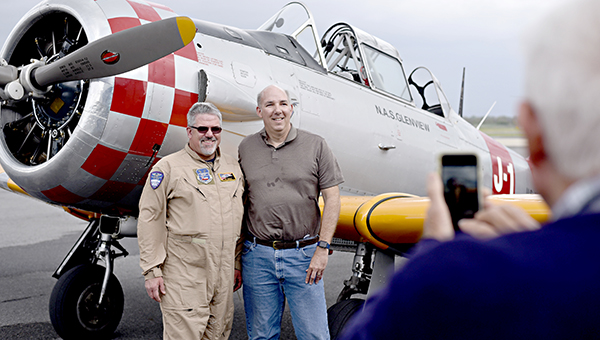 Dan Fordice, left, poses for a photo with Bob Sauls in front of a 1943 AT-6 Texan WWII trainer plane during Spring Is In The Air Day at the Southern Heritage Air Foundation Museum Hanger on Saturday. SHAF hosted the event featuring all-you-can-eat crawfish, plane rides and free museum tours. (Courtland Wells-Vicksburg Post)

Not even few rain showers and an overcast day could deter the Southern Heritage Air Foundation during its Spring is in the Air Fundraiser on Saturday. The crawfish was coming out hot and the historic planes were flying through the clouds.

The event featured a crawfish boil, free tours of the museum, plane rides and a special appearance by author Robert Matzen.

“We hoped we’d have a 100 people and we are right at it,” Patty Mekus said. “We’ve sold out all our tickets and are having to get more crawfish. Everybody is eating plenty of food and we’ve had a lot of good tours.”

Matzen finished a four-day tour of Vicksburg by giving a talk on his new book Mission: Jimmy Stewart and the fight for Europe. The book details the famous actor Jimmy Stewart’s tour of duty as a pilot in World War II.

Flights in the 1943 AT-6 Texan, which was a World War II pilot trainer, offered the chance to take a birds eye view of Vicksburg and the Mississippi River and even experience a few aerobatics maneuvers.

“I thought it was great,” Bob Sauls said of his trip in the plane. “Not something I had planned to do, but it turned out it was amazing. I have been in small planes before, but it was a lot different than your normal small plane. A lot faster, a lot more stable and the aerobatics were amazing.”

World War II veteran Jay Vinyard was trained as a pilot in the Air Forces’ version of the AT-6 after enlisting in March of 1942 following the attack on Pearl Harbor. The event offered him the chance to see this classic plane take to the skies once again.

“I travel through a lot of museums like this and it is always interesting. You see one B-51, but I have seen them lined up almost out of sight,” Vinyard said. “They are fantastic aircraft. A little tricky to fly in a crosswind, but basically get in the air and they’re more fun than you could ever imagine.”

Seeing those planes restored to their former glory and offering a new generation a chance to experience them is what makes the Southern Heritage Air Foundation special.

“Most of the time, they are static display, but in these planes you are able to touch them and ride in them,” Mekus said. “We call it living history.”