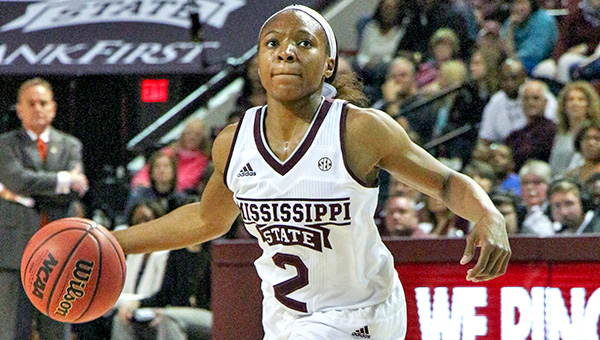 Morgan William scored a career-high 41 points to lead Mississippi State to a 94-85 overtime win in the Oklahoma City Regional final of the NCAA Women’s Tournament on Sunday. Mississippi State advanced to its first Final Four and will play either Connecticut or Oregon Friday in Dallas. (File/The Vicksburg Post)

The win came three years and a day after William’s stepfather, Donnie Rory, passed away. After she was named Most Outstanding Player of the regional, she dedicated the victory and the performance to him.

“He’s the reason I am where I am today with basketball,” she said. “He just did so much for me, working out when I was younger. He had no doubt because of my height. We put in so much work in the gym. For me to just come out here and do this, it’s amazing. I just wish he was here to see it.”

William scored 10 points in the fourth quarter and 12 in overtime to set school and Southeastern Conference records for most points in an NCAA Tournament game. She made 13 of 22 shots, including 6 of 8 3-pointers. She also had seven assists and no turnovers.

“My point guard was as good as they get today,” Mississippi State coach Vic Schaefer said. “She put us on her back and led us. She was obviously feeling it. I ran a couple of different things for us and just had to keep going back to it because they were having a hard time dealing with it. She wanted the ball.”

Mississippi State will play Connecticut or Oregon in the Final Four in Dallas on Friday.
Stanford will play either Oregon or Florida State in the other national semifinal. The last two Final Four participants will be determined Monday night.

Victoria Vivians had 24 points, six assists and six rebounds, and Teaira McCowan added 10 points for Mississippi State (33-4) in a game that featured 24 lead changes and 12 ties.

In addition to her career-high point total, William had seven assists and three rebounds.

Kalani Brown scored 27 points and Nina Davis had 18 for Baylor (33-4), which lost in the Elite Eight for the fourth consecutive year — and in Oklahoma City for the third time in five years.

“At Baylor, we have expectations that are higher than an Elite Eight,” Baylor coach Kim Mulkey said. “Whether that’s egotistical, fair, whatever, it is what it is. We have to keep feeding that monster that we started 17 years ago.”

Davis, one of the most decorated players in school history, played in all four of those Elite Eight losses. She thought this one would turn out differently.

“Every time we would get the lead, they would come down and shoot a 3, we would foul, and could never get that one stop that we needed,” she said.

“It took a gut-check, gut-wrenching performance by our kids today and we delivered,” Schaefer said. “I thought our kids were unflappable. I thought they were resilient. They showed tremendous toughness, a lot of character in their heart.”

“Seventeen turnovers to four, you shouldn’t even be in the ballgame, not at the Elite Eight level,” Mulkey said. “But we hung around and hung in there.”

The Bulldogs took a 43-40 lead into halftime after McCowan banked in a shot at the buzzer.

Baylor hit its final five shots in the third quarter to go ahead by one and had a chance to finish the game off in regulation with the score tied at 75 with 3.4 seconds remaining after a jump ball possession arrow was in its favor.

The Lady Bears inbounded the ball under their own basket, but McCowan was able to tip the pass and allow William to intercept it and force the overtime period.