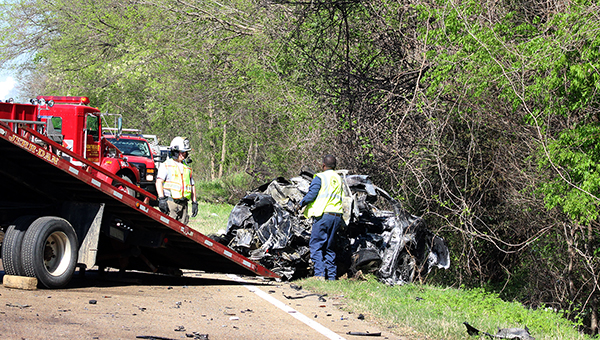 TRAGIC ACCIDENT: Crews work to clean up the wreckage and debris from a fatal accident Sunday afternoon on Mississippi 3, south of the International Paper Mill entrance.

A Vicksburg man is dead after a Sunday afternoon head-on collision involving an 18-wheeler and a car on Mississippi 3 south of the International Paper Mill entrance.

Patrick Traylor, 28, was killed when the northbound Chevrolet Cobalt he was driving crossed the center of the highway and collided with the 18-wheeler, which was southbound, Mississippi Highway Patrol trooper Cpl. Eric Henry said.

Traylor was pronounced dead at the scene by Warren County Coroner Doug Huskey, and his body was taken to Jackson for an autopsy by the state medical examiner. The driver of the 18-wheeler was not injured, Henry said.

The collision caused a fire, which engulfed the car, and Traylor’s body was found outside the car. Huskey said authorities were unable to determine at the scene if he was ejected in the wreck.

Warren County fire coordinator Jerry Briggs said firefighters from the Culkin and Northeast Volunteer Fire departments arrived at the scene to find the car and a portion of the highway on fire. The highway, he said, was scattered with flaming debris.

He said the gas tank on the Cobalt and the driver’s side fuel tank on the 18-wheeler both ruptured at some point during the wreck, spilling fuel on the highway. He was unable to say what actually caused the fire or if the car’s tank ruptured on impact.

Briggs said the Mississippi Department of Environmental quality was notified about the fuel spill.

The wreck remains under investigation.