Experienced restauranteurs bringing in ‘The Anthony’ 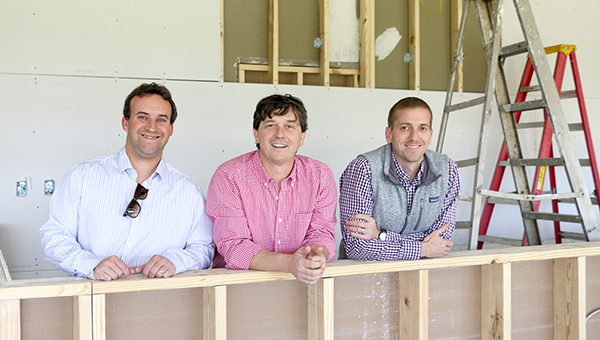 UNDER CONSTRUCTION: The owners of The Anthony stand behind the bar that is under construction for the restaurant that will be located at the Vicksburg Country Club. Pictured, from left, are Derek Howard, Clint Walker and Matt Bell.

“We are very excited to open The Anthony in our hometown of Vicksburg, and are thrilled to have the opportunity to bring our concept back,” Howard said.

Named after Howards’ father, who was also a friend and mentor to Walker and Bell, The Anthony will be located inside the Vicksburg Country Club facility at 127 Country Club Drive and is set to open in late spring.

Currently, the facility is undergoing a remodel, which includes a relocation of the bar area and a space to accommodate smaller gatherings like birthday parties or corporate presentations all in a décor incorporating modern and rustic elements.

Patrons can also look forward to a variety of offerings on the menu.

“Everything on the menu is different than anything in Vicksburg,” Kevin Roberts said.

Roberts, who formerly worked at ROCA Restaurant & Bar and 10 South Rooftop Bar & Grill, will be taking the reins as head chef at The Anthony.

Roberts said his menu is geared towards fun casual dining but added there will also be some high-end items on the menu.

Entrees and desserts to look forward to will include homemade boudin, banana pudding cheesecake and barbeque shrimp and grits.

There will also be plenty of seafood offered, steaks and flat bread pizzas.

“And everything will be made from scratch,” Roberts said.

At start up, Roberts said he expects he will have anywhere from 10 to 15 people working with him in the kitchen and is planning on using a couple of students from the Hinds Community College Culinary School.

Joe Love will be serving as the general manager of the day-to-day operations, Howard said.

Love is from Jackson, but said he intends on moving to Vicksburg eventually.

“I’ve never really spent a lot of time here in Vicksburg, but I have grown to like the town,” Love said.

The Anthony will also be offering its entire menu to country club members downstairs, Love said, in addition to take outs and off site-catering.

The newly built bar overlooks the golf course, and patrons will be able to order anything from craft beer to house specialty drinks.

“We are trying to think outside the box with some fruit fusion drinks as well as good whiskey and scotch drinks,” Love said.

On Sunday’s, The Anthony we will also offer bottomless mimosas and a Bloody Mary bar.

“We will be open seven days a week with lunch and dinner services on Mondays through Saturdays and lunch on Sundays,” Howard said.

And a limited amount of reservations will be taken during operating hours, added Love.