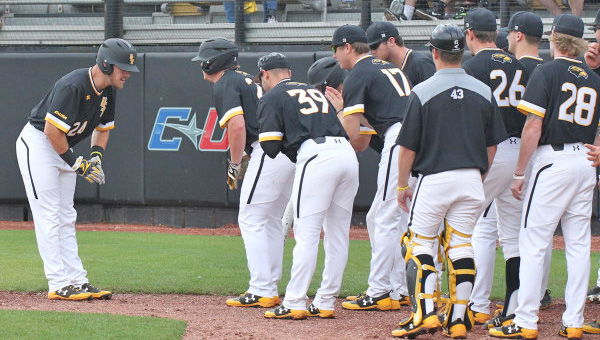 Southern Miss’ Dylan Burdeaux, left, is greeted in the dugout by his teammates after leading off the bottom of the first inning with a home run Sunday against Marshall. Burdeaux also hit a two-run double later in the game as Southern Miss went on to win 13-3. (Joe Harper/Southern Miss Athletics)

“Thought we came out and made a statement right off the bat,” Southern Miss coach Scott Berry said. “Hayden goes three up, and three down and we answer with three runs, and really make their guy pitch a lot in the first inning.”

Burdeaux, one of three Golden Eagles who drove in three runs, hit his sixth home run of the season to start the game. later on, he hit a two-run double that capped a four-run eighth inning as Southern Miss run-ruled the Thundering Herd (11-10, 3-3).

Roberts (3-1) allowed three runs on five hits. He walked three and struck out seven. Stevie Powers wrapped it up by getting the final two outs.

“Hayden Roberts really pitched (Sunday),” Berry said. “The reason I say that is because he did not have his best stuff. Honestly, it was probably the worst stuff he had all year, but he pitched with it, and you’re talking about a Marshall team that had double-digit hits in both games prior to this one, and he limits them to five.”

After Burdeaux and Keating led off with back-to-back home runs off Marshall starter Patrick Murphy (1-1), the Golden Eagles took a 3-0 lead when Taylor Braley walked and eventually came around to score on a passed ball.

Braley, who walked three times and scored two runs, has 24 walks on the season, an average of one per game.
Marshall made the score 3-2 on Shane Hanon’s two-run homer to left-center field in the top of the second inning, but Southern Miss bumped the lead to 4-2 in the third when Cooper forced in a run with a bases-loaded walk.

The Golden Eagles opened an 8-2 lead, scoring four runs with two outs in the fourth inning on Irby’s bases-clearing double and Donaldson’s single.

Hanon, who had entered the series without a home run, lined his second of the game over the left-field wall to lead off the fifth inning to get the Herd back to 8-3.