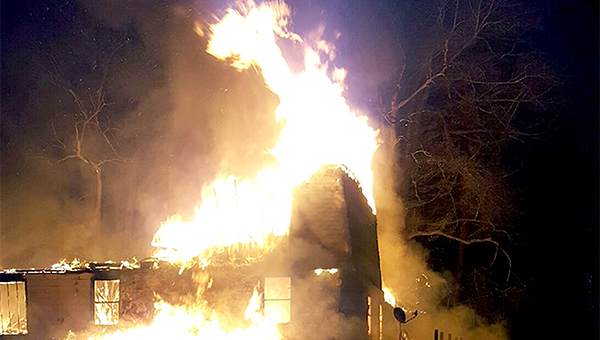 Vicksburg firefighters Wednesday morning were going through debris and extinguishing hot spots in the wake of the an early morning fire that destroyed one building and damaged another at the Whispering Woods apartment complex, 780 U.S. 61 North.

City and volunteer firefighters were notified of the blaze about 2:24 a.m. Wednesday.

Volunteer firefighters responding to the blaze arrived to find one of the buildings fully involved and threatening an adjacent building. Fire entered the ceiling and attic area of the second building, but was contained, according to fire department reports. No one was living in either building.

“This is something we do as a regular practice,” he said. “We’ve had three fires here in the past 13 months.”

In February 2016, an eight-unit apartment building was destroyed by fire. A Nov. 4 fire heavily damaged a second building in the complex.

Danczyk said pumpers from fire stations 2 and 6, a ladder truck from the city’s Central Fire Station, and two ambulances responded to the fire. Also responding were units from the Culkin and Bovina Volunteer Fire departments, including two tanker trucks used to provide water to fight the fire.

“Everyone worked under a unified command, and everything was excellent,” said Warren County fire coordinator Jerry Briggs.

City officials in early 2016 condemned the apartment complex, and in December put it under the city’s slum clearance ordinance, requiring property owner Whispering Woods Holdings LLC, a Delaware-based holding company with offices in Florida, to prepare a plan to either demolish or rehabilitate the apartment complex.