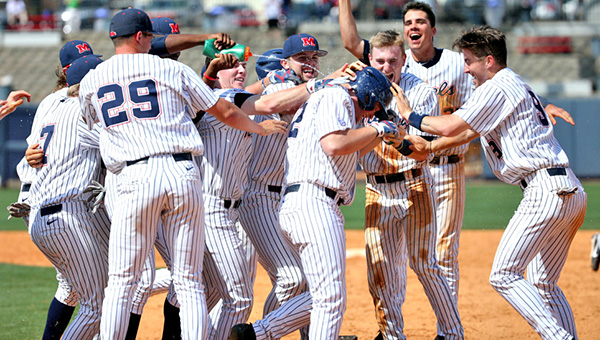 The Bulldogs scored five runs in the top of the first inning and rode the hot start to an 8-3 win over Memphis. Mississippi State (16-10) scored five or more runs for the fourth straight game. It has won all four.

“This was an outstanding win for our club tonight,” Mississippi State coach Andy Cannizaro said. “I was really proud of the way our guys started off tonight. We started fast offensively.”

Ryan Gridley went 3-for-5 with four RBIs for the Bulldogs. Two of the runs were driven in with a single during the big first inning. Josh Lovelady also had a two-run double in the first.

Gridley added an RBI single in the second inning and a solo home run in the eighth.

Memphis starter Jonathan Bowlan (2-3) took the loss, but settled in after his shaky first inning. He only allowed one other run while pitching through the seventh inning. He walked one and struck out six.
Mississippi State will travel to Oxford to play Ole Miss in the opener of a three-game series Thursday at 7 p.m..

Pinch-hitter Michael Fitzsimmons delivered a walk-off RBI single in the bottom of the 10th inning Tuesday to give Ole Miss (16-9) a win over Little Rock (9-16).

Houston Roth (1-0) struck out the side in the 10th, and the perfect inning earned the freshman the first victory of his career. Ole Miss starting pitcher Greer Holston did not allow a run over 5 1/3 innings.

Little Rock scored all four of its runs in the seventh inning due to a two-RBI single by Cale Ridling and a two-run homer by Zach Baker. The rally gave the Trojans a 4-2 lead.

Ole Miss tied it in the bottom of the eighth with a pair of bases loaded walks.

After leaving the winning run at third base in the ninth inning, Ole Miss got the win in the 10th. Kyle Watson walked and went to second on a ground out. After an intentional walk to Tate Blackman, Fitzsimmons ripped a single into left field for the game-winner.

Braley (3-0) allowed five hits, walked one and struck out seven. Matt Wallner went 2-for-4 with a double and two RBIs for USM, and Dylan Burdeaux had two hits.

Wallner played three different positions in the game. He started in left field, moved to center field win the eighth inning, and then went to the mound in the ninth to close out the game. Wallner pitched a perfect ninth, striking out one batter, to earn his third save of the season.