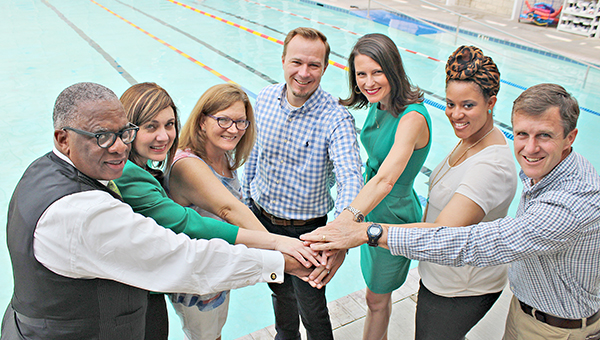 A host of local entities are trying to teach Warren County’s children to swim by making a SPLASH.

SPLASH — an acronym for Schools Practicing Life Altering Swim Habits — is a pilot program designed to teach water safety and swimming to second- and third-grade students.

The program will start this April with students at Dana Road, Sherman Avenue and St. Francis elementary schools.  Students will bus from school to the Purks YMCA for 10 30-minute sessions over the course of two weeks. In September, after they move into third grade, they’ll do the same thing for lessons at City Pool.

“It’s been an idea I’ve had for a long time. There are other programs that use it, like in Tupelo and some on the Coast, that we’ve studied, but this is a one of a kind, unique program,” said Vicksburg Swim Association coach Mathew Mixon, who hatched the idea for the program about two years ago. “It was something I felt a need to do in our community, and put it together from there.”

The idea for the program came from Mixon, but he found plenty of support when he pitched it to the people he’d need to implement it.

Vicksburg and the Vicksburg YMCA split the cost of the pilot program’s $15,000 operating budget and allowed for use of their facilities.

City Pool manager Sylvia Gurtowski, along with Mixon, Susan and Bob Athow, and the YMCA staff, will teach the classes. The Athows are certified American Red Cross lifeguard instructors who have long taught swim and lifeguard classes in Vicksburg.

“It’s a good inner city program for the schools and for the students and parents. It’s a win-win for everybody. But particularly, it’s a partnership between the city, the schools and the Y so we can teach kids how to swim at a much earlier age,” Vicksburg mayor George Flaggs said. “Learning to swim is something that I’m passionate about. I learned to swim when I was 5 years old and have been swimming ever since. I just thought it was an awesome program to start in this community.”

The classes themselves will be basic, Mixon said. The emphasis, as with many beginner swim lessons, will be on teaching students enough to save themselves in an emergency. At the end of each session, each student will receive an evaluation and be encouraged to go for more advanced lessons.

“It’s a water safety and awareness and learn to swim program all wrapped up into one,” Mixon said. “You’re just trying to get them to learn water safety awareness, and the basics and fundamentals that will help them in an emergency.”

Approximately 270 children will participate in the program’s initial run in 2017. If it’s a success, it can be expanded to all of Warren County’s elementary schools.

Phillip Doiron, executive director of the Vicksburg YMCA, said immediate success would be having everything run smoothly when the program begins April 24. The real success, however, would be defined years down the road.

“Our big goal is to go to the entire school system, or everyone in Warren County. We’ll need to include some outside funding for that,” Doiron said. “Success, logistically, will be if we can handle getting the kids in and out of the water, if we can teach the kids the skills we’re aiming to teach them. That sort of thing. True success will be in the stories you’ll hear years later about, ‘Because I took this class I had an incident but I remembered my skills and I could save myself.’ That’s the real success story. Every kid needs to learn how to swim, or be exposed to water safety.”