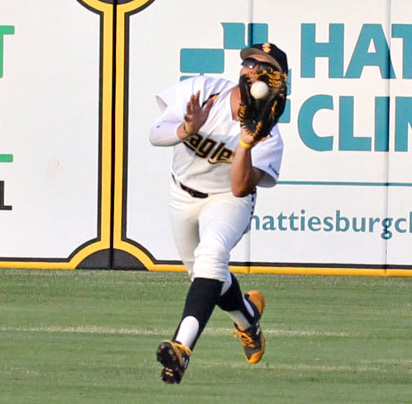 HATTIESBURG —Southern Miss did the majority of its best work at the plate Wednesday night when it was down to its last outs.

Storme Cooper and LeeMarcus Boyd both homered, and the Golden Eagles scored all but one of their runs with two outs in an 8-4 victory over New Orleans.

After dropping their first midweek contest of the season at Alabama on Feb. 22, the Golden Eagles have won their last seven, including back-to-back wins over South Alabama and UNO this week.

“For us to be able to get two wins against two quality programs this week was big for our program,” Southern Miss coach Scott Berry said.

Storme Cooper started the two-out scoring binge with his first career home run as a Golden Eagle, a three-run shot to left in the bottom of the second inning.

The Privateers tied the game at 3 in the seventh inning with a two-out, RBI single by Tristan Clarke.
But the Golden Eagles answered in the bottom of the inning, and Boyd got it started when he homered with two outs off UNO reliever Grant Baker (0-1).

Dylan Burdeaux followed with a double and came home on a double by Daniel Keating. Hunter Slater’s single to right field scored Keating for a 6-3 lead.

UNO scored a run in the eighth inning on Orynn Veillon’s single to get within 6-4, but Southern Miss added two runs on a one-out wild pitch and a two-out double by Boyd.

In voters’ hands: Fate of sports complex to be…