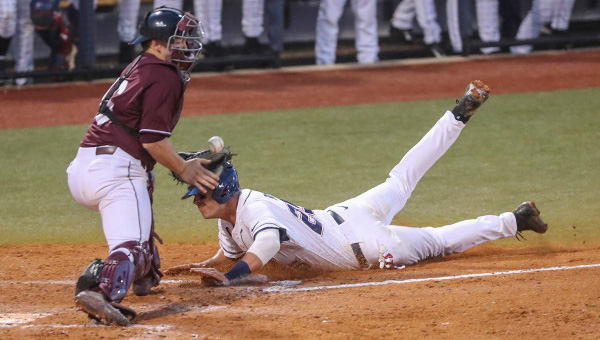 OXFORD — The game-winning rally came a little earlier this time, but was no less satisfying for Mississippi State.

Cody Brown hit a two-run home run and Josh Lovelady had an RBI triple in the fourth inning, and Mississippi State’s bullpen turned in a sensational performance to lead the team to a 5-3 win over Ole Miss on Friday night.

Mississippi State (18-10, 5-3 Southeastern Conference) has won the first two games this weekend to clinch the series, and has won six in a row overall. The finale is Saturday at 1:30 p.m.

Starting pitcher Peyton Plumlee was lifted after facing four batters, with his only out being from a pickoff, but the bullpen picked him up.

Denver McQuary followed with three innings of three-hit ball. He allowed one run and struck out a pair. Cole Gordon struck out two batters in a perfect eighth inning, while Spencer Price worked around a one-out double in the ninth inning to record his eighth save of the season.

“The bullpen was phenomenal tonight, starting from the first inning,” Mississippi State coach Andy Cannizaro said. “It was a Bulldog mentality from the bullpen. We picked up some timely hits, defended it well and won the series. Pitcher after pitcher threw great tonight.”

Brown and Brent Rooker both had two hits and two RBIs for Mississippi State. Rooker’s RBI double in the third inning tied the game at 1, and then Brown’s two-run homer in the fourth gave the Bulldogs the lead for good. Lovelady hit his RBI triple later in the fourth inning.

Rooker added a solo home run in the fifth inning to give Mississippi State a 5-3 lead.