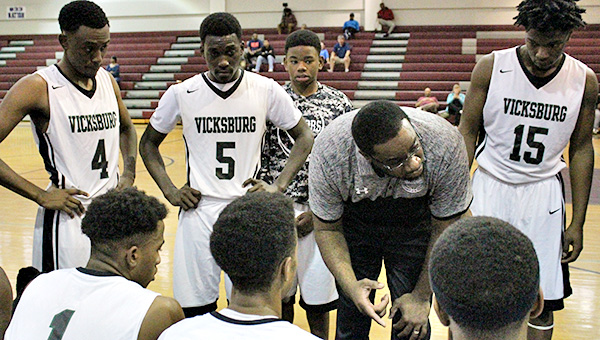 Vicksburg High assistant boys basketball coach Kelvin Carter has been offered the program’s head coaching position, but will have to wait until next month’s school board meeting for approval. (Ernest Bowker/The Vicksburg Post)

Kelvin Carter has waited 12 years for his chance to become Vicksburg High’s boys’ basketball coach. He’ll have to wait another month for it, hopefully, to become official.

Carter, who spent the second half of the 2016-17 season as Vicksburg’s interim head coach when Dellie C. Robinson had health issues, has been offered the job on a permanent basis, Vicksburg Warren School District athletic director Preston Nailor said.

The offer was made this week, but the formal recommendation did not make it to the VWSD Board of Trustees in time for a vote at its monthly meeting on Thursday. The board will instead vote on it when they next meet on April 27.

“When Coach Robinson took ill and K.C. was asked to step in, nothing he did lessened what Vicksburg basketball was about. And when he interviewed, he was impressive,” Nailor said. “Him being a former basketball player, and a former Vicksburg High basketball player and being there for 12 years, he knows the community and the program and what it’s all about. Now he’s got the keys to drive and take us into this new era.”

Carter graduated from Vicksburg High in 1992 and went on to play at Panola College (Texas) and Arkansas-Monticello. He joined Vicksburg High’s coaching staff in 2005 and spent the past 11 years as the school’s ninth-grade coach.

All the while, Robinson was grooming him as a replacement for what seemed an impending retirement. Robinson talked often about stepping away from coaching, but kept coming back.

Carter’s chance, unfortunately, came sooner than anyone wanted or expected. Robinson fell ill during a game at Madison Central on Jan. 10 and did not return to the bench the rest of the season. A few weeks ago Robinson notified Nailor that he was indeed retiring after 25 years at VHS, with one state championship, two other appearances in the state finals, and nearly 800 victories on his resumé.

“When he would tell me, ‘I’m going to do it one more year,’ it was like, ‘OK, coach,’” Carter said with a playful groan. “It almost feels like he’s going to come in the gym and say we’re going to start practice. He won’t ever be gone. I definitely didn’t want it to happen that way. I wanted him to go out on his own terms. That was out of our control.”

Carter led the Gators to a 10-5 record after Robinson went down, including a win over Class 5A runner-up Neshoba Central and a first-round victory over West Point in the Class 5A state tournament.

If he’s approved by the school board, this will be Carter’s first permanent head coaching job. His performance during an extremely difficult situation, however, convinced Nailor that he could handle it.

“Whether it’s a teacher, a principal or a coach, we always want to hire people with experience. But how do you get experience without somebody giving you an opportunity?” Nailor said. “The kids know Coach Carter. The kids adore Coach Carter. Having somebody in place that the kids respond to was important.”

Carter felt like he did well during his stint as the interim head coach, and during the interview process. He admitted, however, to being nervous when word circulated that several of the state’s top coaches — some of whom have won state titles — expressed interest in the job.

“Some of the people that interviewed have gold balls, and I don’t have tennis balls,” Carter laughed.
What he did have was Robinson’s recommendation and a dozen years learning at the side of his mentor.

“We were in practice when they walked in and I was nervous. I said in my mind that three people wouldn’t come if they were telling you you didn’t have the job,” Carter said.

The three men who walked into the gym only told Carter they wanted him to have the job, however. He’ll have to wait another month for the five members of the school board to tell him whether he actually does have it.
In the meantime, he’ll keep doing what he’s done every day for the past 12 years — working to make Vicksburg High’s basketball team the best it can be.

The Mississippi Department of Transportation has closed the Muddy Bayou Bridge on Mississippi 465 in the Eagle Lake community indefinitely,... read more