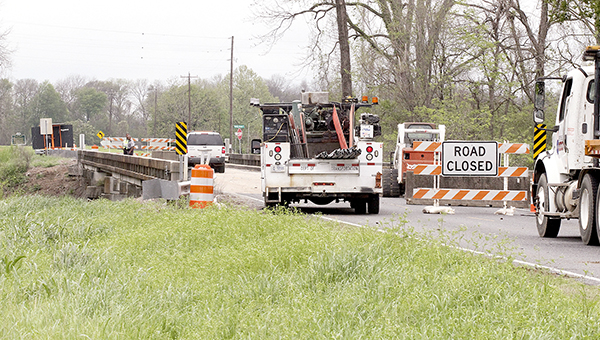 Mississippi Department of Transportation workers close the Muddy Bayou Bridge near Eagle Lake on Thursday. The bridge is closed because of structural problems but will remain open for foot travel and small vehicles such as ATVs. (Courtland Wells/Vicksburg Post)

It could be several months before the Muddy Bayou bridge is replaced and reopened to traffic, according to information from the Mississippi Department of Transportation.

Officials with MDOT did not have a definite date when the bridge will be replaced. A press release on the closing said, “MDOT is developing plans to repair the bridge and anticipate opening the bridge within months. It will remain closed until repairs are made.”

“This closure was necessitated after the bridge inspection revealed damage to the foundation of the bridge,” said MDOT district engineer Kevin Magee. “As repair plans progress, we’ll be able to give a more definite time frame for the length of the closure.”

The bridge was closed Wednesday afternoon after an inspection by an MDOT bridge inspection team discovered severe decay in the bridge’s timber piles.

“People will still be able to access the boat ramp and the stores on 465,” he said.

He said the Eagle Lake Volunteer Fire Department has placed trucks on either side of the bridge to provide fire protection for residents, and the Vicksburg Warren School District has buses on each side of Muddy Bayou picking up students.

“We appreciate our district bridge crews for taking immediate action and closing this bridge on Highway 465 to all traffic,” said MDOT Executive Director Melinda McGrath. “This kind of catch highlights the importance of having skilled engineers and enforcement officers to make quick assessments and implement traffic control.”