Performances for ‘Gold in the Hills’ resume 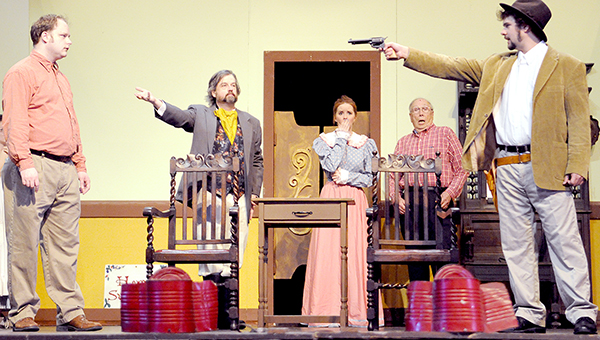 Eric Hesselberg, at right, playing the constable, shows up to arrest Ian Tubman, at left, playing John Dalton, during a scene from act one of "Gold in the Hills" during a dress rehearsal on Thursday evening at the Parkside Playhouse. "Gold in the Hills," will open for it's 76th year this Friday and will run every Friday and Saturday through the end of the month. Curtains go up at 7:30 pm. Tickets are available at the doors, as well as at Paper Plus and The Cricket Box. [at rear, from left are Connie Daene, 14, daughter of Roger and Susan Daene, Paul Bennett, Jai Dobson, and David Hayworth]

“Gold in the Hills,” proclaimed the world’s longest-running melodrama by the “Guinness Book of World Records” will be performed this weekend and next at the Parkside Playhouse Theatre.

The 1890s New York melodrama, presented by the Vicksburg Theatre Guild, has been produced in the River City since 1936, and was listed as one of the 10 Things You Really Have To Do in Mississippi by OnlyInYourState.com, last year.

The cast includes a hero, heroine and a villain and features sing-along musical numbers.

Paul Ballard, who is one of the show’s cast members and plays Happy the singing waiter, said it was an honor to perform in the melodrama.

“There is this large measure of privilege because you are doing now what people have done for 80 years,” he said.

Ballard has played his character between 30 to 40 years he said, and added that each “Gold in the Hills’ performance is unique.

Because the cast of characters rotates performers, every show is different because each person brings something special to the stage, he said.

During the performance, Ballard said there are a couple of places in the show where the audience is invited to sing along with the cast.

Song sheets are passed out, and tunes from the 1890s sung include “Sweet Marie,” “Bird in a Guilded Cage,” “The Bowery” and “East Side West Side.”