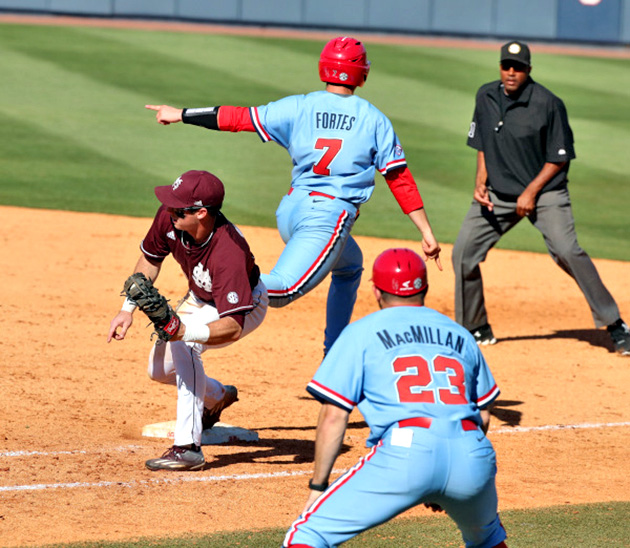 OXFORD — Mississippi State went into its biggest rival’s house and cleaned the place out.

Brent Rooker doubled twice, drove in a run, and saved the game with a diving stab of a hard ground bal in the bottom of the ninth as Mississippi State beat Ole Miss 2-1 in their series finale Saturday at Swayze Field.

Mississippi State (19-10, 6-3 Southeastern Conference) won its seventh consecutive game and swept a series at Ole Miss for the first time since 2003. MSU has won six SEC games in a row.

“What a weekend that was,” Mississippi State coach Andy Cannizaro said. “It was a great weekend for baseball in this state. The crowds were great and there was so much energy in the ballpark. We won three games and we did it in three different ways.”

Rooker doubled in the tying run in the third inning and then saved the game with his play in the ninth.

With the bases loaded and two outs, Tim Rowe smoked a hard grounder down the first base line. Rooker, playing deep, dove to snag the ball just before it reached the outfield grass. He hopped to his feet and sprinted to the bag to beat Rowe by a step and a half for the final out of the game.

“I knew Spencer (Price) was going to probably throw a slider and try to get beneath his barrel, so there was a good chance a ground ball was coming to either me or Cody (Brown),” Rooker said. “It was a bunch of luck, but it somehow found my glove, and I was able to make a play.”

MSU’s pitching staff walked four batters and struck out five. Mangum (2-2) started and pitched five innings to get the win, and Price worked his way out of trouble in the ninth — with Rooker’s help — to earn his ninth save of the season.

The Golden Eagles (23-5, 7-1 Conference USA) won for the 13th time in the last 14 games while also winning their seventh consecutive road contest.

The Hilltoppers (9-19, 3-5) got three of their four hits in the first two innings. After a groundout to end the second, Roberts allowed just two base runners from that point — a hit batter in the fourth inning and a single to open the sixth.

Sandlin then came in with one out in the sixth and reitred 11 of the final 12 WKU batters. His only blemish was a two-out walk in the eighth. He totaled five strikeouts to earn his third save.

Cole Donaldson and Hunter Slater each collected three hits to lead the Golden Eagles’ hitting attack.
Donaldson delivered a one-out double in the fourth and scored one batter later on LeeMarcus Boyd’s single through the right side to open the Golden Eagle scoring.

Southern Miss extended its lead to 3-0 in the seventh on a two-run home run by Taylor Braley.