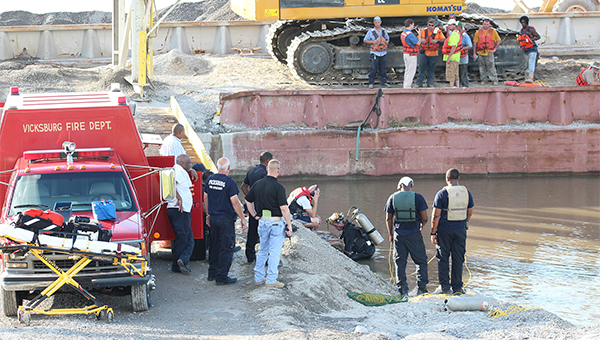 Rescue crews surround the site where a truck, driven by 22-year-old Michael Collins slipped into the Mississippi River in August. The Occupational Safety and Health Administration issued their report recently, finding ‘serious’ violations on the part of Riverside Construction.

The Occupational Safety and Health Administration has cited Riverside Construction Co. for two violations that contributed to an Aug. 23 accident resulting in the death of a truck driver Michael Collins who was working for the company at the former Florida Marine site on the Mississippi River off Warrenton Road.

Collins, 22, was killed when the dump truck he was driving went into the river while he was backing up to a barge to get a load of limestone.

4 The braking system or other mechanisms used for breaking were not operable or in a safe condition.

4 Portable ramps used afloat were not well maintained and designed, constructed or maintained to prevent vehicles from going off the edge.

“On or about September 21, 2016, employees were exposed to drowning due to missing (the) on ramp to prevent vehicles from going over the edge,” according to the citation.

According to information from OSHA, Riverside was fined $19,013.

Officials with Riverside declined to comment. According to OSHA, the company is contesting the violations and the penalties.

“I feel like OSHA should’ve stepped up and done a little bit more than they did,” he said, adding he understood OSHA was limited by federal laws on what they could do.

The accident that claimed Michael’s life occurred in the late afternoon on Aug. 23.

Witnesses told police he was in the truck as it went in the water, but commercial divers hired by Riverside did not find him in the truck.

One witness at the scene told Vicksburg Police Officer Russell Dorsey on the day of the incident that he saw Collins backing up to wait for his load, but that he was “unable to stop the truck as if the brakes went out.”

The witness told Dorsey the truck then rolled backwards into the river with the door open, but said as soon as the dump truck went into the water, the door slammed shut, and the truck went underwater quickly with Collins still inside.

Vicksburg Deputy fire chief Craig Danczyk said later the truck was found in about 45 to 50 feet under the two barges moored at the property.

He said a commercial driver,  who made the dive on the truck, said its side windows were open and the windshield was broken out.

He said the diver searched the truck’s cab and under the barges for Collins but did not find him.

The truck was later recovered and taken to a shop in Jackson where OSHA investigators and Vicksburg police Lt. Leonce Young examined it.

Michael’s body was found near river drift debris near the Baxter Wilson power plant, 11 days after he and the truck went into the river, a crew from Riverside Construction, using a crane mounted on a barge, was removing some debris when the body surfaced.