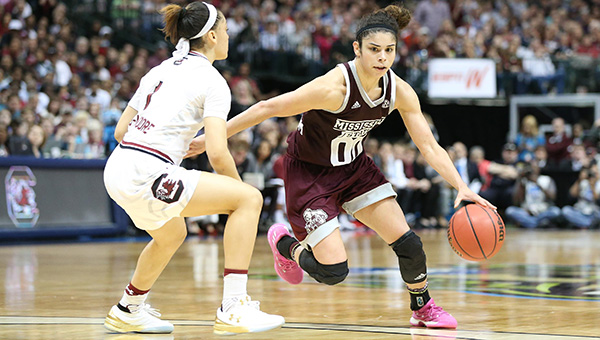 “It wasn’t our best day. But it’s not defining our season,” Bulldogs coach Vic Schaefer said. “Had a heck of a year, man. We’ve beaten two No. 1’s to get here. We played on the last day. Are we disappointed? Absolutely.”

Morgan William, the diminutive point guard who had helped deliver the Bulldogs (34-5) to the title game, wasn’t even on the floor in the fourth quarter of the final game.

William hit the buzzer-beating pull-up jumper in overtime to beat UConn late Friday night. That came after she scored 41 points in an overtime win over Baylor in the Elite Eight. But the 5-foot-5 junior guard struggled getting into the flow in the finale, and admitted that the Bulldogs were tired.

“But that’s no excuse. It’s 40 more minutes for the rest of the season, I guess we just we all collectively couldn’t get on the same page,” said William, who sat stoically answering questions in the quiet locker room.

William finished with 8 points on 2-of-6 shooting with four assists and one turnover in 23 minutes. Jazzmun Holmes, a sophomore, played the balance of the minutes at the point, and had 6 points in 17 minutes.

“She was giving ball pressure and scoring points,” William said. “I can’t be mad, she was doing what was best for the team.”

The best season ever by the Bulldogs ended after an incredible late March run that they couldn’t extend into the second day in April.

“We’ve got some motivation going into next season,” said William, among nine underclassmen on the Bulldogs roster. “A lot of people around the country know who we are. So it makes us want to come back and play great. That doesn’t make us feel any better. “

In their first five NCAA Tournament games this year, Mississippi State played the highest possible seed each time. They beat Washington and NCAA career scoring leader Kelsey Plum in the Sweet 16, took out Big 12 champion and top-seeded Baylor and then pulled off one of the biggest shockers ever in the women’s NCAA Tournament.

But Mississippi State faltered again against a familiar SEC opponent, even after jumping out to a quick 7-1 lead.

“We’ve had obviously some hard times dealing with them, and today was no different,” said Schaefer, 0-9 against South Carolina but 124-42 against everyone else in his five seasons with the Bulldogs.

The Gamecocks (33-4) beat Mississippi State for the third time this season, and 11th time in a row in the series.
Mississippi State won its first 20 games this season, before South Carolina rallied in the second half at home on Jan. 23 to win 64-61. Then in the SEC Tournament championship game on March 5, the Gamecocks overcame a five-point deficit in the fourth quarter and won 59-49.

The Bulldogs, who trailed by as many as 14 points in the third quarter, got within 54-50 with 6:54 left and still had possession before they took two bad shots and followed that with an unforced turnover.

“That’s kind of where the game got away from us. We had it to 54-50, had the crowd going. We were right there,” Schaefer said. “Maybe it took all we had to get to that point and get it back after being down so bad. We didn’t have anything left.”