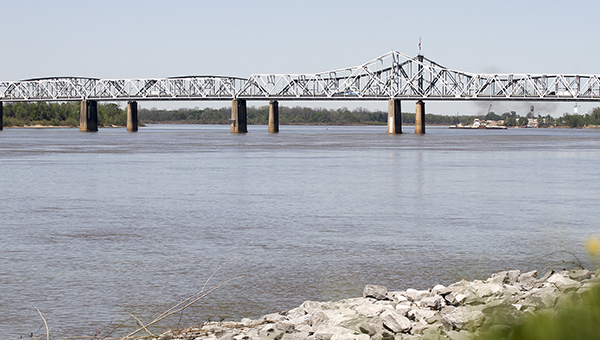 The National Weather Service doesn’t expect any major flood issues this spring, as snow amounts up North are not what they have been in the years past. (Courtland Wells | The Vicksburg Post)

When the warm days of spring become more consistent, people living and working along the Mississippi River and its tributaries start becoming cautious about another aspect of spring besides blooming plants and cutting the grass.

Over the river’s history, springtime has become synonymous with flooding along the lower Mississippi River Basin, and two examples — the Great Flood of 1927 and the Spring 2011 Flood — both occurred in April.

But at the present time, information from the National Weather Service indicates the chance may be slim for a spring flood this year.

“So far, it’s been a quiet sort of time,” said Marty Pope, hydrologist with the National Weather Service office in Jackson. “Looking at it from right now, just looking at everything that I’ve been seeing, it looks like things are looking pretty good so far.”

The current forecast for the Mississippi at Cairo, Ill., is 34.7 feet by April 8, Pope said, and even including projected rain totals for the Mississippi Basin, the 28-day forecast shows the river stage at Vicksburg maybe reaching about mid-April around close to 31 feet and falling on out after that.

Conditions have put the area under what the National Weather service terms an average flood threat.

“The average flood threat means that on any given year, that it (the Mississippi) usually would go above flood stage,” Pope said. “But even looking at it right now, unless we get some extremely heavy rains, across, say, Arkansas across the lower Ohio River and into there, it’s really not going to give us a lot because the snowfall was very little too. The last time I looked, there’s almost no snow across (the upper Mississippi Basin) as of the 31st, except way up in Canada.”

In the 2011 flood, Pope said, there were huge snow packs that were melting, “Then we got that March and early April rainfall that came across say, Arkansas. That’s what caused some of that, plus we had some pretty heavy rains in the Ohio Valley.”

Presently, he said, just looking over the next 10 days, forecasts indicate some pretty heavy rainfall the lower Mississippi valley and maybe across the upper parts of the Ohio Valley that could change some things to turn the projections around, but it would be considered an average (flood) potential, he said.

“Just looking at it, the whole thing has just been quiet kind of flood year,” Pope said.