Bailing out: Community continues to get back to normal after storm 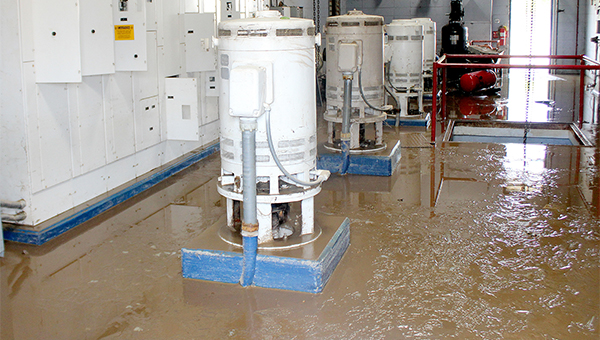 Floodwater damage at Vicksburg’s wastewater treatment plant during Sunday’s heavy rains forced the Board of Mayor and Aldermen Monday to declare an emergency to repair the damage at the plant.

Wastewater director Mark Engdahl said the flooding occurred between 10:30 and 11 p.m. Sunday, when nearby streams swollen by heavy rain overflowed their banks and flooded the plant and the Entergy Rifle Range substation just east of the plant.

Entergy customer service representative Shelia McKinnis said it could be several weeks before repairs are completed on the substation, but said Entergy will reroute power and bypass the station to restore power to the remaining 1,495 customers who remain without power, and power should be restored to those customers sometime Tuesday.

It will also take time to repair the damage at the wastewater treatment plant.

“We got 2 feet of water,” Engdahl said. “We had an operator on duty, and he was able to get our tractor and some other equipment out of the way of the water. When I got here Sunday night, I couldn’t get to the plant, the road was already underwater.”

He called the plant’s main building, which held offices and the plant’s lab, a total loss, adding workers were able to save the plant’s logs and record books, but will have to order bench sheets, which are the forms used to report the daily test report to the Mississippi Department of Health.

Most of the lab equipment, he said, was above the floodwaters and not affected.

Engdahl said the plant’s four pump motors went under water, and the plant’s power panel, which runs the plant will have to be dried out before it can be used because it also took water.

“We’ll have to get those motors taken apart and cleaned and dried and reassembled,” he said. “If we can get one of the larger motors running, we can operate the plant.”

Engdahl said an electrical contractor is expected to be at the plant Tuesday to start work. He said the plant is getting a trailer, which will serve as a temporary office and lab until repairs are completed.

The plant was one of at least three buildings affected by the 10 inches of rain that fell on the area Sunday evening and into Monday morning.

The Vicksburg Police Department had 2 inches of water in its lobby, computer room and another room, but city maintenance workers contained and cleared up the minor flood.

The Vicksburg Convention Center, which recently had a new roof installed, had several leaks.

While wastewater plant officials await a contractor to make repairs, Vicksburg Convention Center director Annette Kirklin said she was waiting for an assessment on the roof.

The board in November 2015 approved an $863,080 bid from E. Cornell Malone of Hattiesburg to replace the center’s original roof installed in 1997. The company completed the project in 2016.

“We had seven leaks,” she said Monday. “I have several leaks in my office. One is in a light fixture; I can see standing water in the light fixture.”

The leaks, Kirklin said, included the exhibition hall, the wall by the escalator, which she said was cascading down, leaks in two meeting rooms, and by a stairwell in a back hallway on the building’s main floor that leads to the back stage area of the exhibit hall.