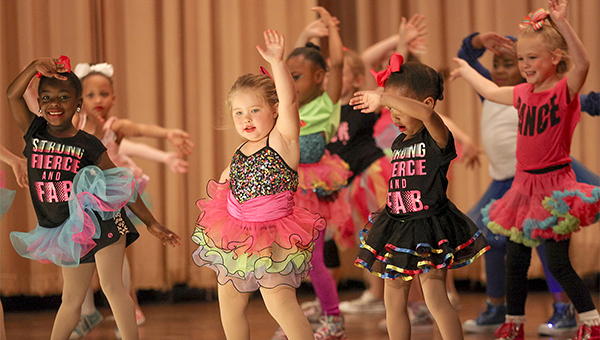 THEY’VE GOT TALENT: Students of Debra Franco School of Dance perform “Its Bitsy Spider” during last year’s Raise The Roof! Talent Search and Competition at Southern Cultural Heritage Auditorium. Deadline for this year’s competition is March 30.

She performed a solo to the song “Work,” and also performed as a member of multiple group dances.

“I didn’t think I was going to win,” Andrews said.

Nathan Mosely was named the first runner-up for his rendition of the song “Who’s loving you.” Mosely, who has been singing for five years, left the stage for a portion of his performance to present a rose to mom.

“I love her so much and she is the reason I am here today,” Mosely said of why he presented the rose to his mom.

There were 19 total acts entered in the competition and the top 10 advanced to Saturday’s finals after which the winners were announced. The competition was held to help the Southern Cultural Heritage Foundation raise the funds to match a grant to replace three of their five roofs.

“I thought it was great,” Stacey Massey said. “I think the kids that competed had a great time. We also had several adult competitors. The ages ranged from four to their 50’s.”

Andrews received a trophy and $500 for winning.

The other performers that placed each received a trophy. The People’s Choice Award was given to a large group ensemble from the Debra Franco School of Dance for performing to the song “Itsy Bitsy Spider.”

Bailing out: Community continues to get back to normal after storm

Floodwater damage at Vicksburg’s wastewater treatment plant during Sunday’s heavy rains forced the Board of Mayor and Aldermen Monday to... read more