Crushing: Payment to repair collapsed retaining wall will be determined after repairs 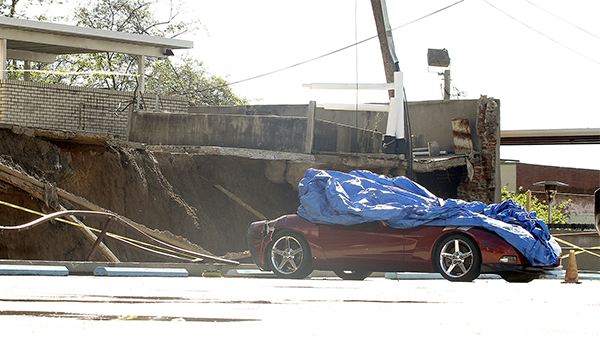 A Chevrolet Corvette remains on the parking deck near a collapsed retaining wall near St. Paul Catholic Church Tuesday. The car was damaged when the retaining wall fell early Monday, spraying debris on the deck used by residents of The Lofts. Debris also damaged railings on the parking deck and blocked the lane leading to Trustmark Bank’s ATM at their downtown Vicksburg office.(Courtland Wells/Vicksburg Post)

Just who is responsible for paying to repair the collapsed wall between St. Paul Catholic Church and the parking deck at the First National Bank Building at the corner of Walnut and Clay streets, will be decided after the wall is repaired, the attorney for the church said.

“We’re going to fix the wall and then sort it out,” said Frank Vollor, the attorney representing St. Paul.

The wall fell Monday after the Vicksburg area was hit by heavy rains Sunday night. The exact cause of the collapse, however, has not been determined, Vollor said.

At the center of the question of who’s responsible for the repairs is an 1891 agreement between the Diocese of Natchez and a company called the Vicksburg Hotel Co., which owned a hotel, known as the Carroll Hotel, that at one time occupied the site. That agreement, Vollor said, indicates whoever owns the property on the north side of the wall is responsible for it.

Whether First National LLC is responsible, however, depends on the negotiations between the parties involved.

“We’re going to stabilize everything and work together,” Vollor said, “and when we get everything worked out, we’re going to sit down and figure out who’s going to pay for it. Everybody’s trying to be cooperative and get things stabilized, because it can get real bad real quick.”

ERDC takes listeners Beyond the Gates with new radio show

Talents on display: Performers shine during annual Raise the…