For Rhonda Minor, giving her time as a volunteer is a pleasure.

“I like helping and caring for our community,” she said.

An employee in International Paper Co.’s human resources department, Minor is in her second term on the United Way of West Central Mississippi Board of Directors and served on the allocations (community impact) committee.

She has served on the board of directors for Good Shepard Community Center, as a volunteer and board member of Vicksburg Family Development Center, and a mentor for the CAP Center. She has also served as a hostess for the Miss Mississippi Pageant for 10 years. 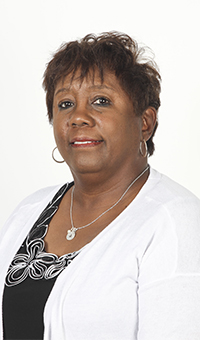 She also sings in the choir and teaches Sunday school — “Whatever they need me to do” — at Mount Calvary M.B. Church, where her husband, the Rev. Mincer Minor, is pastor.

“He was called to go in the ministry after we had been married 20 years,” she said. “I never thought I’d be a preacher’s wife.”

“I started as a volunteer, where you would come in and you would help with the girls club, and they also had men who helped with the boys.

“It was just being a part of the community; sharing my time with some young ladies who needed mentoring and needed a guide, or just someone who cared enough to listen to them. I also gave a little advice.”

From that start, she joined the agency’s board, and was then named to United Way’s allocation committee.

“We would look at each individual agency’s balance sheet and then we would allocat money as it was raised,” she said. “If we raised a lot, they would get what they asked for. If we didn’t, they would have take what we gave them.”

It was while she was on the allocations committee that Minor was named to the United Way Board, she recently began her second term, she said, adding (director) Michele (Connelly) asked me to have stay for a second term.” Part of the duties on the board, she said, included visiting agencies served by United Way. She also works with International Paper during United Way’s Day of Caring.

She said the Good Shepherd Board advised the director, the Rev. Tommy Miller, adding while on the board she visited Good Shepherd’s day care center.

While a member of the Good Shepherd Board, Minor continued serving as a mentor through the CAP Center at Redwood Elementary School, which had been adopted by International Paper.

“I did whatever they (the CAP Center) told me to do,” she said.

“The CAP Center would give us a child, and the counselor, along with the member of the CAP Center, would work together to give students who were struggling or having problems with certain subjects help.

“We would have to send a weekly report to the CAP Center on the number of hours we worked with the child during the week. It can be very rewarding, because you can learn something from them and they learn something, and you want to show them that ‘someone’s here to listen to you.’”

She said topics would range from subjects at school to other areas.

“Some things, we couldn’t get involved with, like personal matters, and when it was really personal, we would let the director know and they would handle it from there, or we would let the counselor handle it. I once tutored one sister, and then she went on to junior high, and I got her sister.”

One reason for her desire to help in the community, Minor said, is because it has treated her and her family well.

“I’m not originally from here. We moved here in 1986, and my husband went to work for Grand Gulf Nuclear Plant. He had worked in a fossil plant in Greenville before coming here, and he retired from Grand Gulf when he was 55.

“It’s my way of giving back. Now I’m also giving to baseball; one grandsons plays baseball and another plays soccer,” she said.

“Helping someone pays off. It doesn’t necessarily have to be someone who’s les fortunate, it could be somebody who’s in need of an ear or a hand, and you let them know someone cares.”

Crushing: Payment to repair collapsed retaining wall will be determined after repairs

Just who is responsible for paying to repair the collapsed wall between St. Paul Catholic Church and the parking deck... read more