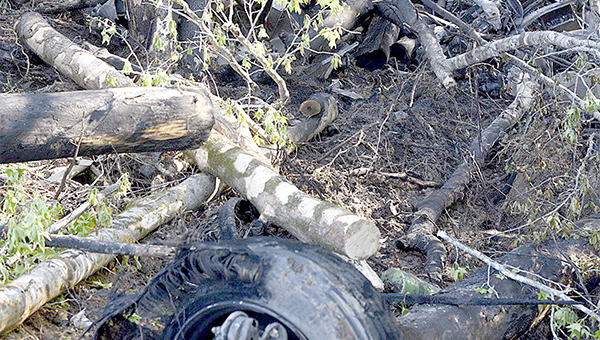 Some of the remains of a fiery crash Wednesday evening on US 61 North was still visible Thursday morning. (Courtland Well-The Vicksburg Post)

A Vicksburg man was in fair condition at University of Mississippi Medical Center Thursday after a fiery wreck Wednesday evening on U.S. 61 North near Oak Ridge Road.

Mississippi Highway Patrol spokesman Cpl. Eric Henry said Eddie Harrison, 37, the driver of the truck owned by Johnny McCool of Vicksburg, was injured after he lost control of the loaded log truck, which was northbound on U.S. 61 North.

The truck left the highway, struck several trees and burst into flames. Henry said Harrison, who was wearing a seatbelt, was ejected from the truck. He was taken to Merit Health River Region and later flown to UMMC by helicopter. No other vehicles were involved in the wreck.

Henry said high winds are believed to have been a factor in the wreck, which is under investigation.

The National Weather Service station at the Vicksburg-Tallulah Regional Airport Wednesday recorded winds up to 23 mph with gusts up to 34 mph.

The wreck occurred about 6 p.m. Wednesday and blocked U.S. 61 North for about 2 1/2 hours while Highway Patrol troopers, sheriff’s deputies, firefighters and paramedics worked the scene.

The highway was reopened to traffic about 8:30 p.m.