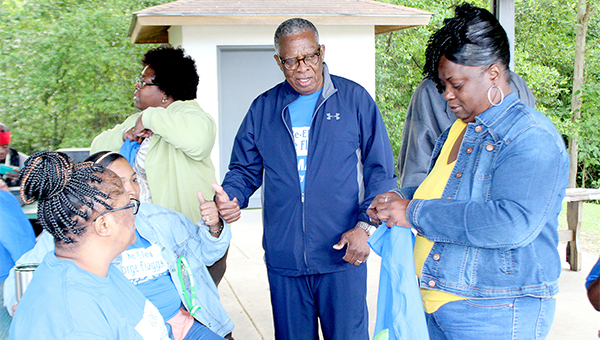 Mayor George Flaggs Jr. officially kicked off his campaign for re-election Wednesday at Delia’s Park in Marcus Bottom with a fish fry and short speech, continuing a tradition he began when he first ran for political office.

“I’ve started every campaign I’ve ever run here,” he told the estimated 20 people, all wearing “Re-elect George Flaggs Mayor,” who arrived early for the program. Other supporters came and went during the event.

“I’m honored and I’m proud to be part of this hallowed ground, and when we do good, everybody does good.”

Flaggs, a former state representative from District 55, is seeking re-election as mayor.

He finished first in a May 2013 Democratic primary and defeated independent candidate Darryl Hollingsworth in the general election for his first term as mayor. He was sworn in July 1, 2013.

He qualified for re-election Feb. 8, and faces two challengers in the May 2 Democratic primary, District 3 Warren County Supervisor Charles Selmon, who has run for mayor before and former Vicksburg police chief and deputy chief Mitchell Dent.

Contractor Darryl Hollingsworth, Willie Robinson and Jennifer Thomas qualified as independents and will not be on the ballot until the June 6 general election.