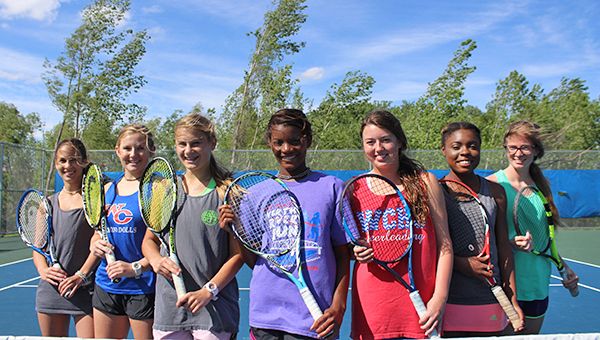 Warren Central girls tennis players, from left, Lexi Stewart, Taylor Smith, Laney Smith, Skylar Gibson, Amanada Boleware, Olivia White and Lauren Davis have a combined record of 33-3 this season and have powered the Vikings to a 9-0 team record. Also on the team but not pictured is Madison Embry. (Ernest Bowker/The Vicksburg Post)

When Warren Central’s tennis team lost several key starters to graduation last year, it was obvious a makeover would be needed.

To make it a success required a feminine touch.

The Vikings’ girls players have gone 33-3 this season, and have carried the team to a 9-0 record heading into today’s Division 4-6A championship match against Clinton at 4 p.m. at Halls Ferry Park. It’s a marked role reversal for a team that has long relied on its male players but is now fueled by girl power.

“The guys have always been the ones carrying the girls, and now the girls are carrying the guys. It’s like, ‘What’s going on here?’” laughed senior Lauren Davis. “We lost a lot of guys, and we worked in the summer and offseason and all the hard work is paying off.”

Davis is one of three seniors on the team, along with frequent doubles partner Olivia White and Amanda Boleware. Boleware missed the first half of the tennis season with an injury suffered during soccer season in January, so Davis and White have picked up the slack.

Between them, White and Davis have only lost one match.

“Lauren Davis and Olivia White have really stepped their game up from last year,” Warren Central coach Jeff Pilgrim said. “Olivia’s ground strokes and lob have gotten a lot better. Lauren has gotten better at picking up the pace. Top to bottom, every girl’s volleying has gotten better. They’ve been dominating this year.”

In high school tennis, team matches are comprised of seven individual matches worth one point each. The boys and girls each play one singles match and two doubles matches, and there is one mixed doubles match.

Besides emerging as a potent lineup, the surprising part of Warren Central’s female success has been the depth the team has showed. There are eight girls on the roster and all of them have won a match this season. They’ve shuffled around the lineup, playing either singles or doubles based on the opponent, while showing no ego or jealousy about claiming more prestigious spots.

White and Davis have spearheaded the charge, but Pilgrim noted that the emergence of underclassmen like Madison Embry, Laney Smith and Taylor Smith have provided the depth needed to fill out an excellent lineup.

“We were returning four starters, but Boleware was hurt for most of the year so we had to play three JV players from last year — Madison Embry, and Laney and Taylor Smith. Those three players have worked real hard in the offseason and been a big reason the girls’ side has been so dominant this year,” Pilgrim said.

Now the trick is to maintain that dominance during the part of the season that matters most.

Thursday’s home match with Clinton is for the Division 4-6A team championship, and Warren Central will also host the division’s individual tournament Monday morning. In addition to the team playoffs, the Mississippi High School Activities Association has a separate tournament to crown champions in the various match types.

The Class 6A team playoffs seemed to be Pilgrim’s main focus for now, however. The Vikings will have a tough draw whether they win the division or not — either Madison Central or Northwest Rankin in the first round, followed by Tupelo in the second.

Madison Central eliminated the Vikings in the second round last season on its way to the Class 6A championship.

With his girls playing well and several capable players on the boys’ side, however, Pilgrim said he likes the team’s chances.

“Even though we have a really hard route, I feel as good or better than last year’s playoffs,” Pilgrim said. “Even though our boys struggled in the beginning of the season they’ve really picked their game up here of late. With the girls’ success and the boys stepping up, that has a lot to do with my confidence going into the playoffs.”