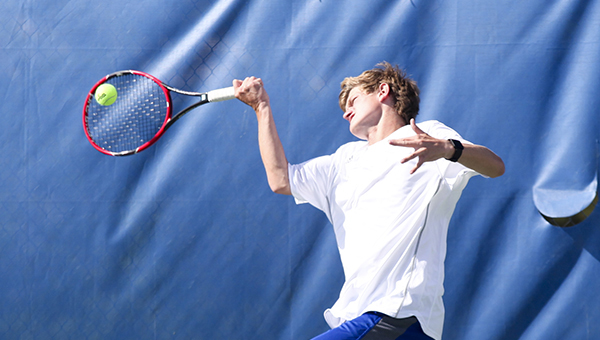 By the slimmest of margins, the quest for a division championship and an undefeated season both came to an end for Warren Central’s tennis team on Thursday.

Clinton’s Kevin Zhang and Ernest Tche won the No. 2 doubles point in a third-set tiebreaker against Warren Central’s John Robert Jabour and Grayson Parman, and the Arrows claimed a 4-3 match victory to clinch the Division 4-6A championship at Halls Ferry Park.

It was the first loss of the season for Warren Central (9-1), and will send them into the Class 6A playoffs as the No. 2 seed from Division 4-6A. The Vikings will face either defending state champion Madison Central or Northwest Rankin in the first round on April 17.

Warren Central had only lost three girls matches all season, but lost two on Thursday.

That left the No. 2 boys doubles point, where Clinton rallied for the win. After dropping the first set, Zhang and Tche came back to take the second and then the tiebreaker.

“I thought we played really well, but we did not finish well. We would get up and let them back in it on a few courts,” Warren Central coach Jeff Pilgrim said.

Warren Central will play at Brandon on Friday afternoon, and then hosts the Division 4-6A individual tournament Monday at 9 a.m. at Halls Ferry Park.

St. Aloysius only dropped one set in its six match victories, and took care of Manchester Academy to win the MAIS District 3-AAA regular-season championship.