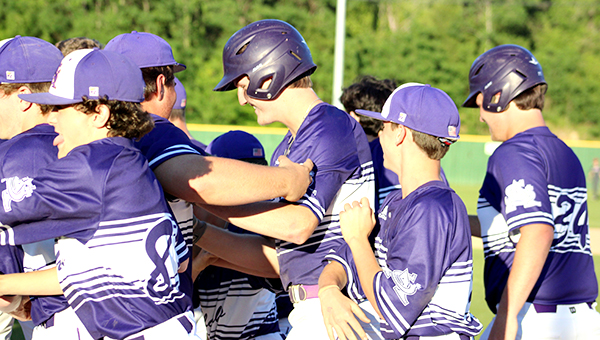 St. Aloysius’ Jake Pierce is mobbed by his teammates at home plate after hitting a three-run home run in the first game of a doubleheader Friday against Hartfield Academy. St. Al swept the doubleheader, 13-3 and 7-1. (Ernest Bowker/The Vicksburg Post)

That’s probably why, when he lifted a high fly ball to left center field in the fifth inning Friday against Hartfield Academy, he assumed it would be caught or at best be a double.

Then it got into the wind and kept carrying … and carrying … and carrying some more, right over the fence. The three-run homer was the coup dé grace for the Flashes in a 13-3 run-rule victory over Hartfield in game one of a doubleheader. The momentum continued into game two, where they got a 7-1 victory that kept their playoff hopes alive.

“At first I thought I was out. Thought it was a pop fly. Then it kept on carrying,” Pierce said. “I went up there with a heavier bat than usual because the pitcher was throwing slow. He threw one outside, I just squared it up and it didn’t even feel like I hit the ball. I saw it go. I finally saw it go over the fence and I just thought, ‘After all this time. My senior year. Finally.’”

St. Al (15-4, 5-4 District 3-AAA) bounced back nicely from a 6-3 loss on the road to Hartfield (7-8, 3-6) earlier this week. The Flashes got the timely hits they lacked in the first meeting and sidestepped some of the other blunders that have plagued them lately.

St. Al committed two errors, neither of which led to a run, and erupted for seven runs in the fourth inning to blow the game open after having two runners thrown out on the basepaths in the third. In Tuesday’s loss they left eight runners in scoring position.

“I think the last two days of practice were really good. We had some senior leadership. Guys came out really focused and worked on a lot of the things that led to the loss the other night,” St. Al coach Sid Naron said.
Landon Middleton shook off a rough second inning in which he allowed three runs to throw a five-inning complete game. He struck out three batters and retired the last seven he faced.

Kieran Theriot went 3-for-4 with two doubles, an RBI and three runs scored for the Flashes. Tyler Breithaupt drove in two runs and scored another despite not having an official at-bat — he walked twice, was hit by a pitch with the bases loaded and hit a sacrifice fly — and Thomas Phillips had an RBI single and scored twice.
The biggest hit, however, was from Pierce.

With two outs in the bottom of the fourth and St. Al already ahead 8-3, the senior hit a ball toward the gap in left center field. It carried over the wall for a three-run homer and an 11-3 lead.

The next batter, Phillips, walked and scored on Theriot’s double. In the fifth inning the first two batters reached base before Garrett Breithaupt singled into left field to finish the game via the mercy rule.

“It’s an amazing feeling. I think that was the final step in beating this team in the first game. That really put them under,” Pierce said of his home run.

In game two, the Flashes scored four runs in the second inning and two more in the third to seize control early and went on to win 7-1.

Theriot was 2-for-4 with an RBI and a run scored, while Thomas Trichell singled, doubled and drove in two runs. Josh Collins pitched and scattered seven hits while walking none and striking out six.
Aden Clark went 3-for-3 with a run scored for Hartfield.