Purple Heart, other medals, back where they belong 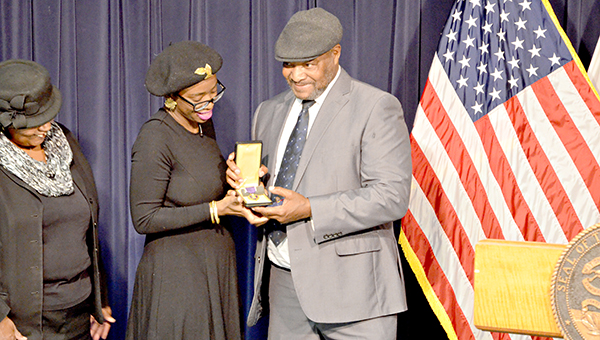 Harold J. Walker was presented with his Purple Heart by Illinois State Treasurer Michael Frerichs at a ceremony in Chicago Wednesday. Walker’s Vietnam service medals were turned over to the state of Illinois after the bank where he had them stored closed. He was joined at the ceremony by his niece Ceva Brown and sister Mabel Brown.

He placed his Purple Heart, Vietnam Service Medal and National Defense Medal in a safety deposit box at a Chicago bank, but when he returned years later to retrieve them, the bank no longer existed.

Walker’s decade long search came to an end Wednesday when his medals were returned to him by Illinois State Treasurer Michael Frerichs at a ceremony in Chicago. The medals had been in the state’s unclaimed property collection since 2007 when they were turned over following the closing and sale of the bank where Walker had secured them.

“I want to say thank you everyone for coming and thank you for getting my medals back,” Walker said during the ceremony. “You can’t explain it, there is just no explaining what the medals mean to me and my family…I knew where I had left them, but the bank had changed and in the process my medals got lost.”

The safety deposit box was in Walker and his mother’s name and his medals had been kept there since the ’70s when he returned from the war. For years, the state was unable to find a forwarding address or contact number for Walker.

They were finally able to make contact with him after his sister Mabel Brown searched the state’s database and added a phone number to an entry about property belonging to her mother.

Walker drove the 11 hours to Chicago to recover his medals at the ceremony.

“We offered to mail his medals to him, but he said ‘we’re not going to take any risk with losing them again,’” Frerichs said.

“I want to thank him for his service to our country, our state and for coming here today.”

Walker moved to Chicago at the age of 18 before being drafted into the Army as an infantryman from 1969-70. After the war, Walker spent 28 years working for the Illinois Department of Corrections.

He returned to Mississippi in 2002 after retiring.

He was joined at the ceremony by his sister Mabel Brown and niece Ceva Brown.

“We want to thank you for being able to locate the military medals,” Mabel said.

“We thought they were gone forever, but to have them back in our possession is indeed an honor and we want to say thank you.”

Frerichs said that unclaimed items are typically auctioned off after 10 years if the owner cannot be located, but the state never auctions military medals.

She said they currently have more then 100 unclaimed military medals that they hope to return to their rightful owners.

“It is a great honor to return the Purple Heart Medal, Vietnam Service Medal and National Defense Medal to Mr. Walker,” Frerichs said. “For veterans, these honors represent sacrifice and sincere love for this country. We could not be more proud to play a role in this reunion.”