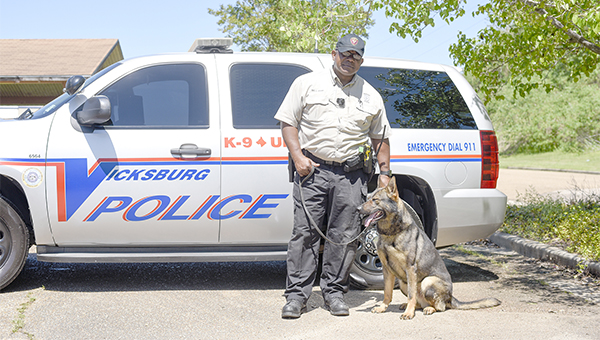 A 10-year veteran of the Vicksburg Police Department is retiring.

X-on, one of the department’s two K-9s is leaving the force for a less strenuous life as a pensioner and former officer who has done his job well.

His replacement is a 2 1/2-year-old German Shepherd named Cezar, donated to the city from Lackland Air Force Base, San Antonio, Texas, who will take over X-on’s duties in explosives detection and tracking and apprehension. He will be working with X-on’s partner, police Lt. Leonce Young.

“X-on has been with us a long time, but he is getting up in age and he was having some medical problems,” Police Chief Walter Armstrong said. “We decided to retire him and bring in a new dog.”

Cezar, he said, has been trained, but will undergo more training with Young.

“He’s young and just full of energy,” Young said. Cezar, he said, is a military bomb dog, but should soon be certified in patrol and apprehension.

He expects to attend United States Police Canine Association training with Cezar within the next two weeks.

“We usually go to Camp Shelby for the training and stay in Hattiesburg,” he said.

From Russia, X-on was trained in explosives and cadaver search, and bought by a company in the U.S. that trained him for tracking and apprehension.

“We were together for 10 years,” Young said. “I’m not losing him. He’s going to be my guard dog around the home. I’m keeping him.”

And that means X-on will need to get used to having Cezar around, since K-9s live with their partners.

“When I brought Cezar home, X-on was not happy,” Young said. “The following day, usually when I get up, X-on’s running around the cage because he knows we’re getting ready to go to work, and to see me take Cezar and put him in the truck, it really bothered him a lot. He started barking and whimpering.”

But X-on, he said, is starting to try and learn and understand the newcomer, “But he still feels like this is his house and he controls it. He gives Cezar a hard time. Over a period of time, I think they’ll be O.K.; they just need to learn each other.”

Mayor George Flaggs Jr. officially kicked off his campaign for re-election Wednesday at Delia’s Park in Marcus Bottom with a... read more