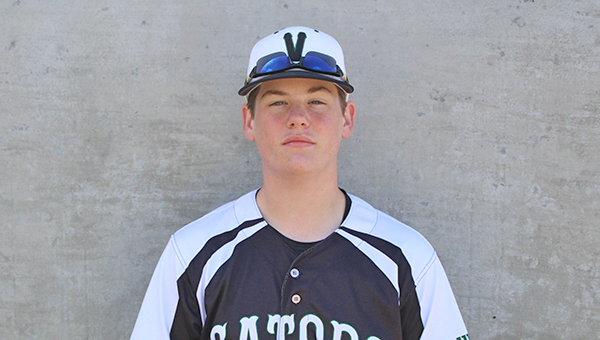 It was the Gators’ first win in nine meetings with Ridgeland, a streak that dated back to 2013.

“We did a lot of little things tonight that we haven’t done all year, like getting timely hits,” VHS coach Derrick DeWald said. “All the hard work we’ve put in, I’m starting to see it pay off in a positive way.”

Luke allowed seven hits, but only walked one batter and struck out six. He threw 116 pitches and worked his way out of jams in the fourth and fifth innings with only minimal damage. Ridgeland (8-10, 6-2) left two runners on base in the fourth inning without scoring a run, and only came away with one run after loading the bases in the fifth.

“I wanted to pitch him to get him some experience for the playoffs and for next year. He went out and pitched a gem,” DeWald said. “I was very proud of him tonight. He pitched out of some tough situations. He pitched very well against a good team.

The Gators (6-12, 3-4 Division 4-5A) staked Haden Luke to a 2-0 lead in the first inning with an RBI triple by his brother Chandler Luke and an RBI groundout by Gage Ederington.

Chris Farrish hit a two-run single in the fifth to make it 5-1.

Jarren McCaplin and Branden Humphrey also drove in runs for the Gators, who will host Pearl Saturday at 2 p.m. at Bazinsky Field.

“I kept telling the guys all year that all it was going to take was winning one game against a good, quality opponent to believe in themselves,” DeWald said. “I believed they could do it. The other coaches believed they could do it. Now I think they believe they can do it. The rest of the year we’re not going to be somebody that just lays down like a dog for other teams.”

Wilkinson County Christian tied the game with a two-run home run with two outs in the bottom of the seventh, and then PCA scored twice in the eighth inning to beat WCCA and keep its playoff hopes alive.

Bradley McCullough started PCA’s winning rally with a one-out double, went to third on a wild pitch, and scored the go-ahead run on an errant pickoff throw. Josh Collins was then hit by a pitch and eventually scored on a sacrifice fly by Brayden Ray for an insurance run that turned out to be the difference in the game.

PCA (11-12, 3-3 District 5-AA) has won three consecutive district games after losing three of the first four. It likely needs to win its last four as well to have a chance at reaching the postseason.