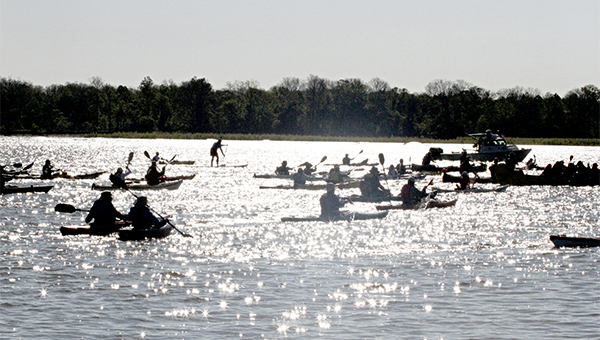 Participants in the Annual Bluz Cruz 22-mile race down the Mississippi River start the race in Tallulah, La Saturday. The race featured over 70 boats and 100 participants.(Courtland Wells/Vicksburg Post)

Not even some unexpected barge traffic could slow down the racers in the 13th annual Bluz Cruz Saturday.

“The last five miles were pretty good and I tried to get some separation from everybody,” Capel said. “I had one guy on my tail, and coming up the Yazoo I caught a couple rollers and was able to surf them. That sped me up about a mile an hour and that gave me a little separation because he was in a faster boat.”

Tim Schramm, 42, from Jackson, Tennessee, came in just behind Capel in 2:16:41. This was Schramm’s first time competing in the Bluz Cruz.

“It was a gorgeous day out there,” Schramm said. “It was a little breezy and had a lot of headwinds, but you can’t beat a day like this. The weather was fine. The water was fine. A good challenge.”

Schramm said that he ended up behind Capel early on after they went on opposite sides of a barge.

He was able to close the majority of the half-mile gap, but was unable to catch Capel in the end.

“Phil’s been paddling for a long, long time,” Schramm said.

“It is an honor to come in that close to him. I feel good that I came in second to Phil.”

The racers had to fight through choppy water for the first five miles because of two passing barges.

The water then evened out allowing the racers to have a smooth trip for the majority of the race.

“One guy in front of me fell out so I tried to maintain and not make any mistakes until we got into some better water,” Capel said. “We passed the two barges and at five miles it smoothed out. Then, we met one barge and it messed up the water.”

Seventy-eight boats finished the race, which started at Madison Parish Port in Tallulah.

“It is the last Mississippi River race left that gets on the big part of the river with any distance,” Bluz Cruz committee member Tim McCarle said. “It is the oldest race in Mississippi now. If you want to get out on the river and have the safety boats, this is what is left for you to do.”

The Bluz Cruz is hosted annually as a fundraiser for Service over Self.

The organization helps to repair homes for people in need in Vicksburg and Warren County.