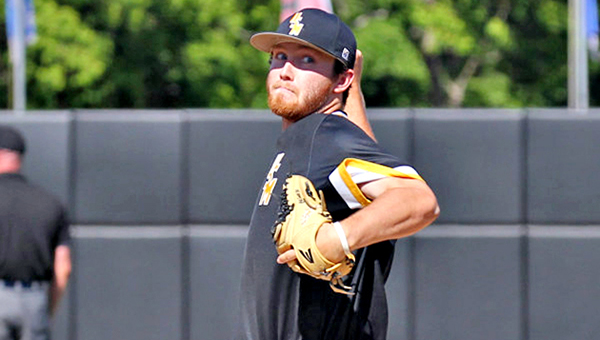 Taylor Braley’s two-out single put Southern Miss ahead for good, and Dylan Burdeaux and Matt Wallner each had a two-out, run-scoring single in back-to-back innings as the Golden Eagles pulled away from the Panthers for a 5-1 victory.

“We’ve been pretty clutch with that all year,” Southern Miss coach Scott Berry said. “We take a lot of pride in that. To me, that’s competing. That’s not giving in and that’s not giving up.

“It’s a different game every time you come out to play and you have to find other ways to win than just outslugging people and scoring runs.”

With the win, Southern Miss (26-6, 10-1 Conference USA) clinched its fourth consecutive series to open conference play while improving to 17-2 at home.

The Golden Eagles opened the scoring in the first inning, when Burdeaux doubled and eventually scored on a wild pitch by FIU starter Tyler Myrick (3-2).

The lead held until the fifth inning. The Panthers strung together a couple of hits and two walks to even the score against Southern Miss starter Hayden Roberts, with Kobe Lopez singling and eventually coming around to score on a wild pitch.

But the Golden Eagles immediately answered. Storme Cooper singled, took second on an infield chopper and moved to third on a fly to right field.

After Mason Irby was hit by a pitch and Hunter Slater walked to load the bases, Braley smoked a grounder into left field to give the Golden Eagles a 3-1 lead.

“Coach Berry talks about that all the time,” Braley said. “I think we had scored eight runs in a game the other day and seven of them were with two outs. We really don’t need to be leaving it up to that, but we’ve been getting it done with two outs.”

In the seventh, Wallner bounced a two-out single through the right side to score Slater for a 4-1 lead, and Burdeaux’s two-out double in the eighth inning scored Cooper with the game’s final run.

Colt Smith (1-0), who relieved Roberts with two outs in the fifth, picked up his first win as a Golden Eagle with three scoreless innings. Smith gave up two hits while striking out three in keeping the Panthers off the scoreboard.

Nick Sandlin picked up his fourth save of the season by logging the final four outs of the game.
Burdeaux and Cooper combined for four of USM’s seven hits Saturday. Burdeaux hit two doubles while Cooper had a single and a double and scored twice.

Javier Valdes led FIU with a double and single.