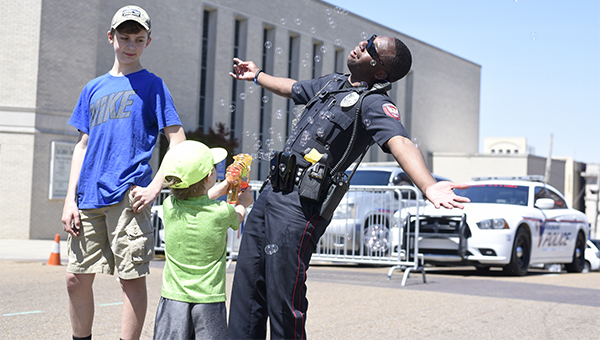 Washington Street was bustling with activity throughout Saturday for the 30th annual RiverFest. The blues music of Osgood and Blaque wafted down the street in the afternoon as people enjoyed food vendors, an arts and craft show and a downtown merchant sidewalk sale.

“We have an abundance of people down here. We have them going all the way past China Street,” RiverFest president Christy Pecanty said.

After last year’s event was dampened by rain on Friday and Saturday, the organizers couldn’t have asked for a more picturesque setting for this year’s event. Festivalgoers were treated to a clear blue sky and temperatures in the mid-70s as they took in all RiverFest had to offer.

The theme for this year’s event was “30 years and still rockin’.” Vicksburg High School senior Danielle Sheshane drew the design for this year’s t-shirt, which featured a catfish playing a guitar to symbolize the theme. Her design was chosen from among the entries drawn by students at schools throughout the district.

“Every year we have a competition between the schools,” Pecanty said. “The board comes up with a theme and we present it to the schools.”

The annual event brings 1,000s of people to downtown Vicksburg and serves as a showcase for the district and its merchants.

Many of the merchants were set up with booths on the sidewalks showing all they had to offer and were having special sales to coincide with the festival.

“It brings a lot of people down here that maybe haven’t been down and don’t know what all the stores have,” Mary Helen Welch, the owner of Paper Plus, said.