After cancer battle, Carter has taken the fight to cancer

Pearl Carter has taken what could have been a tragic turn in her life and turned it into a cause to help others. 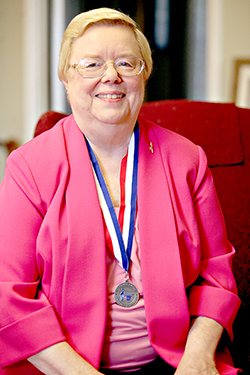 Vicksburg resident Pearl Carter is the lead advocate of Mississippi’s second congressional district for the American Cancer Society’s Cancer Action Network. Carter is a four-time cancer survivor, two of which were breast cancer.

A Wilkinson County native, she has lived in Vicksburg since 1956, and worked for all three branches of the U.S. Army Corps of Engineers in Vicksburg, starting with the Mississippi Valley Division in 1967. She retired in 1999 from the Waterway Experiment Station, which is now known as the Engineer Research and Development Center.

“In 1990, I had breast cancer, and a year later in 1991 I attended my first Relay for Life and was drafted as a Reach to Recovery Program volunteer to work with other ladies who have breast cancer,” Carter said.

“When I had cancer, it was a wake up call, like it is for every body; I was very surprised. I had a Reach and Recovery volunteer who met with me, Betty Fletcher, and she was so good and so helpful.

Reach to Recovery, she said, is the American Cancer Society’s program for women going through breast cancer.

“I was a counselor for breast cancer patients. At first, I talked with a lot women, now still I still do it from time to time. I still do a session with ladies. You provide support to ladies going through breast cancer, usually when they’re first diagnosed and having their procedures, and guide them and answer their questions and refer them to other resources.”

She has also worked with the Cancer Society’s Look Good Feel Better Program, helping women going through treatment and with their wigs and makeup and other assistance.

Since her first diagnosis of cancer, Carter has several other battles with the disease, having a skin cancer removed in the 1990s, and having breast cancer again in 2014.

“I’m happy to say that’s all taken care of,” she said.

In 2010, she was diagnosed with leukemia, “And until October of 2015, I didn’t have any problems, and then my white count started going up, and I started on medication; it was helping, but it wasn’t controlling it.

“In December, I had a different treatment, called Rituxan. I had three IV treatments. The doctor had expected to put me on four treatments and then put me on an oral medication. However, those treatments worked, and for the first time in seven years, I have a normal blood count. My count is holding at the normal range. He is pleased and so am I.”

Besides her work with cancer patients, Carter has served as a spokesperson for the American Cancer Society, “Although I haven’t spoke as much recently. In the past, I’ve done a lot of programs a different places, nursing homes, churches, worked a lot of health fairs.”

“I’m currently the lead advocate for the 2nd Congressional District,” Carter said. “I go to Washington every September to lobby for whatever issues we are promoting that year, (and) every year, it’s for research funding. Then we go to the state Legislature when they meet and do the same.”

Outside of the American Cancer Society, Carter is a member of Porter’s Chapel United Methodist Church, Ladies of the Lake at Eagle Lake, and a lifetime member of the Salvation Army Auxiliary and a former Salvation Army Board member.

She was recently named to the Good Shepherd Board of Directors.

“I attended my first meeting last week,” she said.” think I’m going to enjoy it, I see a lot of need there, and I hope to be able to help. And look forward to working with them.”

And there is the Relay for Life. Carter has been a relay committee member, and for eight years sponsored a relay team, the Sisters by Choice support group.