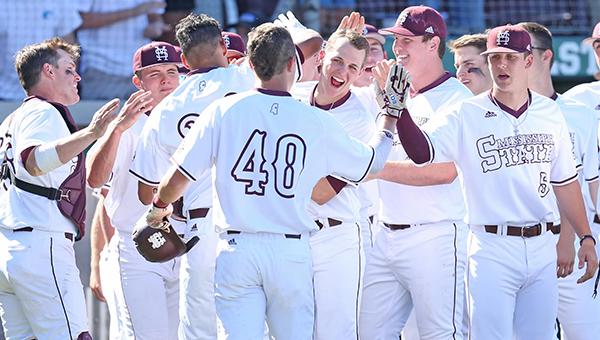 STARKVILLE — Things didn’t look too promising for Mississippi State when it was swept at Arkansas on the opening Southeastern Conference weekend a month ago.

But the Bulldogs have been able to turn things around in a hurry and won their third straight conference weekend by taking the rubber game 10-6 against No. 8 Kentucky on Sunday. MSU is now locked in a four-way tie atop the league with Kentucky, Arkansas and Auburn.

“This is humongous after getting swept the first weekend,” said MSU second baseman Hunter Stovall. “We’re coming together as a team. I love what we’re doing, it’s awesome.”

Just as it did on Saturday, MSU (22-12, 8-4 SEC) had to come from behind after falling behind early. UK jumped out to a 4-1 lead by touching up Diamond Dog starter Jake Mangum for seven hits in the opening two innings — four of which were doubles.

State started chipping away with an RBI double by Cody Brown in the third and added pair of runs in the fourth to tie things up.

Mangum dealt the Wildcats a big blow in the sixth with a two-run triple into the left field corner and came around to score on an error as well to give the Bulldogs a 7-4 lead.

However, Mangum injured his wrist sliding into third on the play and left the game in the next inning, although X-rays were negative. Harrison Bragg pinch-hit for the defending SEC batting champ and belted a three-run home run to left — the first of his career.

“He came off the bench and hit a first-pitch breaking ball for a home run,” Mississippi State coach Andy Cannizaro said. “I was excited about the aggression and intent that he got in the box ready to hit with today. Obviously the result was outstanding.”

Elijah MacNamee led Mississippi State’s 14-hit attack by going 3-for-5 with a double. Mangum and Brown were each 2-for-4 while driving in a pair while Stovall was 2-for-3 with one RBI. Ryan Gridley went 2-for-5 with a double and Brent Rooker also doubled.

Trey Jolly (1-1) gave the Bulldogs a lift out of the bullpen by going a career-long 5 1/3 innings. He gave up one run on three hits, with a strikeout and a walk.

“I felt like I commanded my fastball in and out and my slider was keeping them off balance just enough,” Jolly said. “I kept them on top of the ball and that’s what helped me get some ground balls today.”
Spencer Price came on for the final 1 1/3 innings to earn his 10th save.