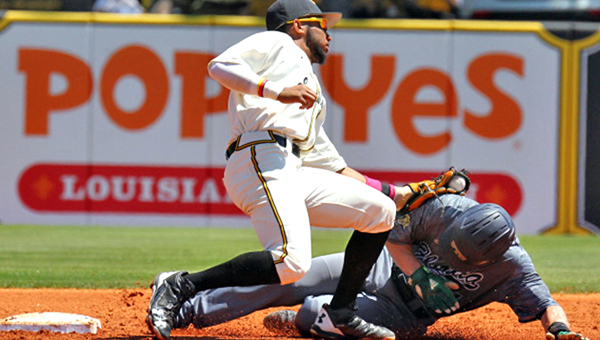 “We had a chance to have a really great weekend and close (a series sweep) out, but we didn’t do anything well enough to do that against a team that was hungry for a win,” Berry said. “I felt like the effort was there. I felt like we never quit even down to the last.

“But we missed on opportunities, we never got any stops after we scored … We didn’t run the bases well, and we didn’t play catch well.”

The result: a methodical, 10-4 drubbing at the hands of Florida International in the finale of a three-game Conference USA series.

The No. 17 Golden Eagles (26-7, 10-2 C-USA) had locked up the series win with back-to-back victories Friday and Saturday but did little to give themselves a chance Sunday:

• The Golden Eagles waded through nine pitchers, the most they had used since facing Mississippi State on March 29, 2015.

The staff combined to give up 13 hits and issue a season-high-tying eight walks as the Panthers (18-14, 6-6) scored in every inning except the first and last.

• The Golden Eagles stranded nine baserunners, including two in the seventh inning. They loaded the bases with no outs, only to hit weakly into a third-to-catcher-to first base double play. A strikeout ended the threat and the inning.

• The Golden Eagles committed a season-high four errors, though only one of FIU’s runs was unearned.
The 10 runs were the most Southern Miss has allowed to a conference opponent and third-most all season.
Despite the loss, the Golden Eagles remained atop Conference USA after both Florida Atlantic and Old Dominion lost Sunday. Both teams are a game behind Southern Miss.

FIU took a 1-0 lead off starter J.C. Keys (2-2) in the second inning on Kolby Follis’ single and made it 2-0 in the third on Kenny Meimerstorf’s sacrifice fly.

Southern Miss tied it in the bottom of the inning on run-scoring singles by Hunter Slater and Taylor Braley, but JC Escarra hit the first of his two solo home runs to give the Panthers a lead they never lost.
FIU added two runs in the fifth inning and another in the sixth to grab a 6-2 lead.

USM’s Matt Wallner hit a solo home run in the sixth, his 11th of the season.

The Panthers wrapped the game up by scoring three runs in the seventh, and another on Zack Soria’s solo homer to lead off the eighth.

“We created some pressure for momentum, but we didn’t finish it,” Berry said. “The same way on the mound. We didn’t get the stops. We scored in three innings, and they came right back and answered.”