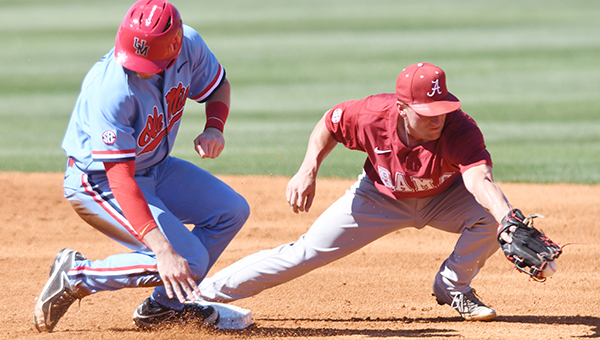 OXFORD — A stiff wind blew north out of Swayze Field all day Sunday, but it was the seventh inning before someone used that to their advantage.

Fortunately for Ole Miss that was junior outfielder Will Golsan, who had a two-run home run in a three-run inning.

The Rebels added three more in the eighth and went on to win 8-2 to complete a Southeastern Conference series sweep of Alabama.

Alabama (13-19, 2-10 SEC), largely silent in the middle innings, roughed up Ole Miss closer Dallas Woolfolk with three solid hits in the eighth. Woolfolk, though, got a fly ball and a strikeout to strand three and limit the damage to just one run.

Ole Miss (20-12, 6-6) led 5-2 going to the bottom of the eighth when Golsan and Tate Blackman had RBI hits. The Rebels tacked on three more runs and earned their first conference of the season and climbed back to .500 in league play.

“We talked about that in pre-game. There’s a big difference between going 3-0 and 2-1,” Ole Miss coach Mike Bianco said. “I’m just proud of the way we played all weekend. We were able to get back up after a tough weekend last weekend.”

Ole Miss freshman left-hander Ryan Rolison struggled in the early innings but settled in and went 5 2/3 innings in his second SEC start.

Before Golsan’s home run put the Rebels up 4-1, Deacon Medders — the second of five Alabama pitchers — had retired nine of his last 11.

Colby Bortles followed Golsan with a base hit. He then took second on a balk and scored to make it a 5-1 lead when Ryan Olenek singled while Medders tried to walk him intentionally.

Golsan was 2-for-3 on the day and 5-for-11 on the weekend. He made an adjustment before taking Medders deep over the left-center field wall.

“It was a fastball up. He jammed me on the pitch before. I felt like I needed to get to it, and I got my barrel to it,” Golsan said.