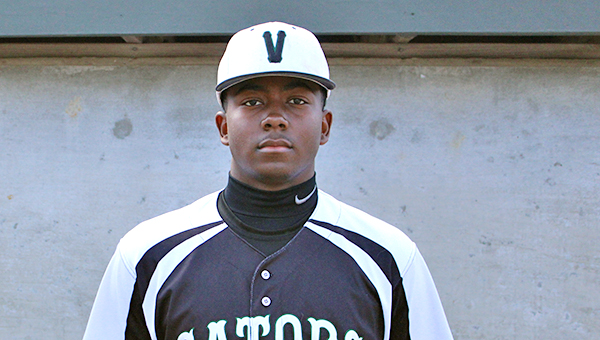 Vicksburg High infielder Chris Farrish had two hits, including a double, drove in two runs and scored two to lead the Gators to a 12-5 win over Lanier at Bazinsky Field.

The Vicksburg Gators didn’t get to celebrate an impressive victory Tuesday night, but when it’s all added up in a few weeks it’ll still count the same.

Chris Farrish had two hits, including a double, drove in two runs and scored two to lead the Gators to a 12-5 win over Lanier at Bazinsky Field.

The Gators (7-13, 4-4 Division 4-5A) committed five errors, struck out nine times, and let a team that they’d run-ruled twice this season hang around longer than coach Derrick DeWald would have liked. Their seventh win of the season, however, marked a milestone. It matches the highest win total in the past three seasons and gave them their first .500 or better finish in the division since 2014.

Vicksburg will not play its final division game against Neshoba Central since it will not affect playoff seeding. The teams had a game rained out earlier this season and it was originally rescheduled for this week, but has been canceled.

The Gators will instead finish the regular season with two home games this week. They’ll host crosstown rival Warren Central Thursday at 7 p.m., and Terry Friday at 1 p.m.

“The team just wasn’t focused tonight. But a win’s a win,” DeWald said.

Jarren McCaplin also had two hits and scored two runs for Vicksburg, which has clinched a playoff berth and has won 14 straight games against Lanier (0-14, 0-9) since 2009. The five runs Lanier scored Tuesday were the most it has gotten in any of those meetings.

Gage Ederington had an RBI at the plate and was effective on the mound. He pitched four innings and allowed two hits and two runs while striking out five before DeWald went to the bullpen to let some other pitchers get work.

Lanier’s pitchers walked seven batters. Isaac Falgham went 2-for-2 with a double and two runs scored at the plate.

“This time of year you’ve got to be better,” DeWald said. “We had some errors, some baserunning mistakes, not hitting with runners in scoring position. It was just an ugly win.”