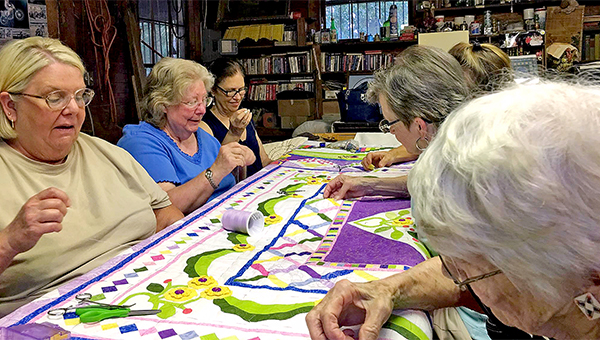 The women of the Bayou Pierre Quilters work on their Hope Blooms quilt. The quilt is being acutioned off and the proceeds will be donated to St. Judes (Photo submitted).

The women of the Bayou Pierre Quilters are auctioning off their latest completed project to raise money for St. Jude’s Research Hospital.

The quilt, which they have named “Hope Blooms”, took the nine women in the quilters group two years to plan and make.

“Picking the fabrics is the easy part,” Peggy Segrest said. “We went through patterns for several months before deciding on one. One of our members decided we needed to do something that was really a stretch to learn some new techniques. It was a definite stretch.”

The group includes women ranging in age from 94 to 50 and they all worked to bring the 92 square inch quilt together.

“Everybody worked at home on it,” Segrest said. “As they get a section finished, I didn’t make any of the individual blocks on it, but I got the nice thing where I got to put it together.”

They started the planning process in the summer of 2014 and completed the quilt in September.

The quilt was then entered in a competition in Hattiesburg, where it placed second in the friendship quilt category.

“This quilt, the center of it is a heart of leaves and it’s got flowers in it,” Segrest said. “It is what they call a medallion quilt. You build it from the center out and add borders or sections to it. This quilt just glows. The colors in it glow.”

The group typically auctions their quilts to assist charities in Mississippi, but this year they decided to donate the proceeds to St. Jude’s.

Segrest said many of them know someone that has been helped by St. Jude’s.

So far, the raffle has raised  more than $5,000 and they are hoping to hit their goal of $7,000 before closing the raffle at the end of April.

They ask that you include your name, phone number and email address so they can send you a copy of your ticket stub and contact you if you win. The drawing will be held May 10.  You can also contact the group on Facebook at Bayou Pierre Quilters.

One lucky winner will have the chance to celebrate Easter by feasting upon a giant chocolate bunny thanks to Rocky... read more