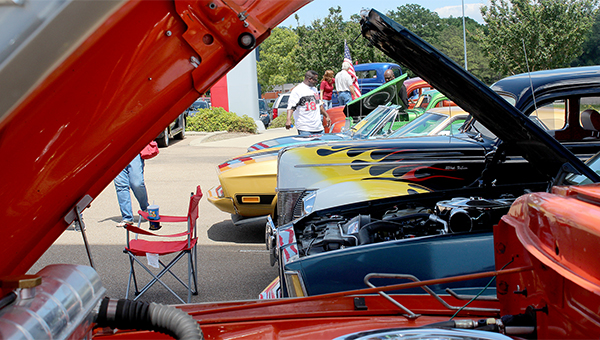 CLASSICS ALL AROUND: The annual classic car show, hosted by Blackburn Motor Company, will be held Saturday, April 22.

Blackburn Motor Company and the Vicksburg Car Cruisers are teaming up to once again host their annual car show Saturday, April 22.

This year’s event, will also include a drive-in movie Friday, April 21 during which the movie Cars will be shown.

The annual event is a fundraiser for the Haven House, a shelter for women in abusive relationships, and all proceeds from the movie and registration on Saturday will be donated to Haven House. Last year the event raised $3,500.

“Every year we have a vote on where the proceeds will go,” Pete Dionne of the Vicksburg Car Cruisers said. “Someone mentions Haven House, we vote unanimously and no one else gets mentioned.”

The festivities will begin Friday evening with the showing of Cars in the front lot at Blackburn Motors on North Frontage Road. Gates for the movie will open at 6 p.m. and the movie will start at 7:45 p.m. Admission is $10 for a carload. Dionne said they are asking people to bring chairs because parking is limited.

The lot will open for the car show at 8 a.m. Saturday and judging will start at 11a.m. Awards will be presented starting at 2 p.m. The cars owned by members of the Vicksburg Car Cruisers will also be on display.

Dionne said that they are hopping to have 100 cars entered in the show.

Haven House will also be selling hamburgers, hot dogs and drinks throughout the day, and there will be a DJ and bounce house for children.

Blackburn Motor Company will also be hosting a test drive event to raise additional money for Haven House. Jeb Blackburn, the General Manager of Blackburn Motors, said that people will have the opportunity to pay a few dollars to test drive a car and then the company will match the amount raised.

“As long as the weather is good, we will have a great turnout,” Blackburn said.