On your mark. Get set. Plant. 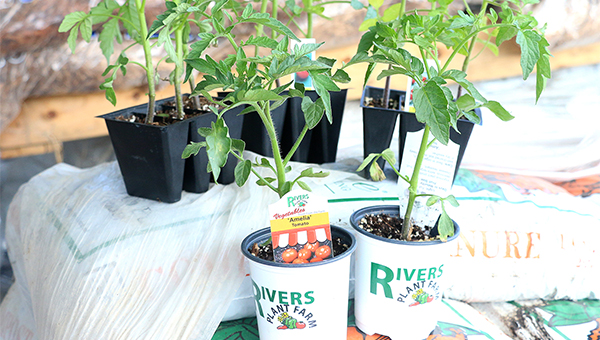 Tomato sandwiches are widely served at Vicksburg functions and many restaurants in town. It fact, for many they are a staple go to meal. In addition to sandwiches, tomatoes are also used in salads and a plethora of other dishes, so the thought of removing them from the food chain could make one shudder. But in 1597 John Gerard’s widely-read herbal, that was published in England, dismissed tomatoes as poisonous and “of ranke and stinking savour,” according to the modern farmer website.

Thank goodness Gerard’s findings were eventually debunked, making way for all to enjoy the savory fruit.

In Vicksburg, many begin flocking to garden centers when the weather starts to warm up in an effort to scout out which variety of tomatoes they will plant in their gardens.

However, there is always the question — when is it safe to plant the tender vegetation?

“Because spring weather has come about three weeks earlier than our normal spring you should be safe in planting your tomatoes now,” Schilling said.

One of the most popular varieties to grow, she said is the Better Boy because it adapts well to our hot, humid weather.

According to the homeguides.sfgate website, the Better Boy is an improved version of Big Boy. This variety, the website states, is resistant to common tomato diseases in addition to having the Big Boy’s extra-large fruit.

“While a Better Boy tomato plant set a Guinness World Record by producing more than 340 pounds of tomatoes from a single plant, you aren’t likely to harvest quite that much from your Better Boy. You can, however, expect an abundant crop of deep red, one-pound slicers that are ready to harvest in just 70 to 75 days,” the website states.

And for those gardeners who are interested in planting heirloom variety tomatoes, Schilling said chances of finding them have become easier.

“The local nurseries and big box stores have started carrying more heirloom plant varieties in the last several years, so they’re much easier to find these days without going to the trouble of finding heirloom seeds and starting them on your own,” she said.

In the Heritage Demonstration Garden at the Vicksburg National Military Park that the Warren County Master Gardeners tend, Schilling said at least 75 percent of their plantings include heirloom plants.

“We strive to plant varieties that could have been grown in a kitchen garden during the Civil War.  Heirloom means that plants are open-pollinated and seeds saved from one year to next to hold on to their specific traits unlike hybrid plants.  We have grown Brandywine, Cherokee purple, San Marzano and yellow pear-shaped cherry tomatoes, which were around in late 1800s. Typically, though, not all heirlooms are that old. I remember my grandfather, Daddy Hop, planting Marion tomatoes, which is an heirloom developed in 1960,” Schilling said.

To ensure one’s tomato garden will thrive throughout the summer, Schilling suggests staggering plantings, and for those with small yards there are varieties of tomatoes that can be planted in containers.