Terry scores in every inning, hands Gators a run-rule loss 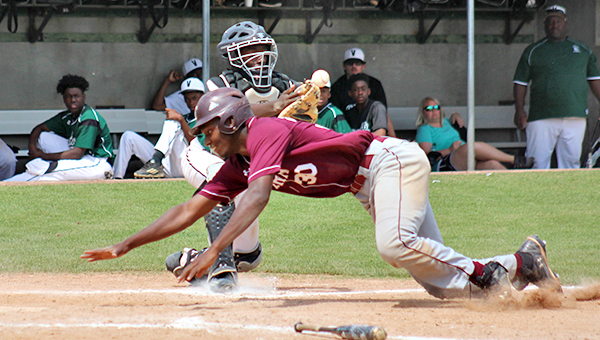 Not for the Vicksburg Gators. Tyrek Pegues went 3-for-4 with three RBIs and three runs scored, Chris Dixon had two hits and two RBIs, and Terry scored in every inning of a 13-2 victory over Vicksburg Friday afternoon at Bazinsky Field.

The Gators (7-15) headed into Easter weekend and their regular-season finale Monday at Clinton with two run-rule losses in less than 24 hours. They lost 13-1 to Warren Central on Thursday night.

Vicksburg coach Derrick DeWald said he’d made peace with the first loss, but was deeply disappointed by the second.

“I’m frustrated. I’m frustrated with our effort today. We just acted like we didn’t want to be here today, like we had other things on our mind. We just didn’t have the intensity and that showed up today,” DeWald said. “We were both coming off of bad losses, and Terry responded better than we did. This is more frustrating than last night for the simple fact for whatever reason we didn’t have the energy we needed to compete. We can’t have this a week away from the playoffs.”

The Gators’ downfall started early Friday. In the first inning, a miscommunication among three fielders led to a dropped fly ball in shallow center field. Instead of the second out of the inning, the error loaded the bases and led to runs on a wild pitch and a sacrifice fly by Terry’s Neil Carter.

Terry (9-16) tacked on two more runs in the second inning, one in the third, two in both the fourth and fifth, and finally four in the sixth. The coup de grace was a sequence in the sixth inning with a walk, two hit batters, an error, a two-run single by Pegues and an RBI single by Dixon that made it 13-2.

Vicksburg’s stumbles weren’t limited to the field, either.

Kameron Jones reached base and brought in a run with a hard misplayed grounder to third base, but was thrown out trying to get to second for the second out of the third inning. The Gators tacked on another run as Tyrese Wolfe singled and eventually scored on a wild pitch, but the baserunning gaffe and questionable call at second on Jones’ play took them out of a potentially big inning.

Vicksburg also left the bases loaded while trailing 7-2 in the fourth inning, and had one last miscue that only added insult to injury.

With two outs in the bottom of the sixth, Branden Humphrey walked and stole second base. Alfred Barnes followed with a ground ball into the hole between third and short that he legged out for an infield hit.

Humphrey, however, seemed to assume Barnes would be thrown out. He round third and was heading toward home in a half-jog when Barnes was called safe. Terry first baseman Jimmy Burse alertly turned and threw to the catcher. Humphrey was caught in a very brief rundown and tagged for the final out of the game.

“That just sums up the whole day,” DeWald said.