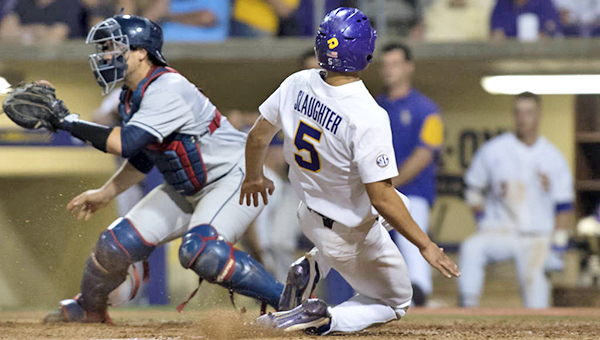 LSU scored in each of the first seven innings — including four runs in the fifth inning and six more in the sixth to blow it open — and amassed 15 hits in routing Ole Miss 15-2 at Alex Box Stadium.

Tim Rowe had two hits for Ole Miss (21-13, 6-7), and Cole Zabowski drove in both of the Rebels’ runs with a two-out double in the ninth inning.

The Rebels finished with only five hits.

“We had some clutch hitting, some two-out hitting, we ran the bases well, and we really just played a great game,” LSU coach Paul Mainieri said. “I was really proud of the guys. I thought it was a challenge tonight because their starting pitcher has been a dominating pitcher in the SEC. We went out there and battled him, had some great at-bats, got off to a great start, and it kept going from there.”

LSU’s offensive onslaught was a balanced effort. Antoine Duplantis went 4-for-4 with a double, four RBIs and three runs scored. Greg Deichmann hit a grand slam, his 11th home run of the season, and finished 3-for-6 with five RBIs. Cole Freeman and Jordan Romero each drove in two runs, and all but one starter had a hit.

Deichmann’s grand slam was part of the six-run sixth inning and gave LSU a 15-0 lead.

Meanwhile, Alex Lange was dominant on the mound for the Tigers. The junior right-hander struck out seven batters in seven scoreless innings. He allowed just three hits and one walk to win for the first time in his last four starts.

Lange was perfect for 4 1/3 innings, not allowing a baserunner until a one-out single in the fifth by Rowe.

“We got some good swings early on, and some balls didn’t fall for us,” Ole Miss coach Mike Bianco said. “(Lange’s) fastball command was excellent, and he was able to throw more breaking balls into the strike zone.”

“It was our worst performance of the year, and it was against a good club, but you only get one loss out of this,” Bianco said. “We have to be ready to compete. It’s disappointing. It always starts on the mound, and we weren’t very good on the mound today.”