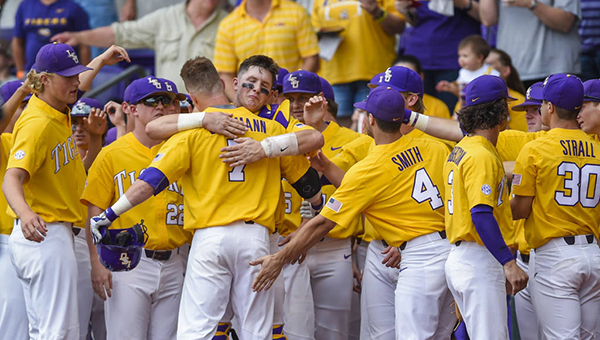 LSU’s Greg Deichmann (7) is congratulated by his teammates after hitting a home run Saturday against Ole Miss. LSU won, 3-2, for its 19th consecutive series win over the Rebels in Baton Rouge since 1982. (Bridgette Hogan/LSU Athletics)

LSU (25-12, 9-6 Southeastern Conference) took two out of three games from the Rebels (22-14, 7-8) this weekend. Ole Miss has not won a series in Baton Rouge since 1982, a 35-year stretch that covers 19 SEC series.
Freeman secured the win for the Tigers by making an acrobatic leaping grab of a line drive off the bat of Bryan Seamster with a runner on second and two outs in the top of the ninth inning.

“I told Cole Freeman not to let anyone ever tell him that he’s too short,” LSU coach Paul Mainieri said. “I’m glad he’s 5-9 and not 5-8, or he wouldn’t have been able to make that play. This is SEC baseball, you’re competing against great players in every game, and it takes every ounce of everything you’ve got in order to win.”

Walker (5-0) earned the win, allowing two runs on six hits while striking out five and surrendering no walks. Hunter Newman pitched the ninth and kept the Rebels off the scoreboard to earn his fifth save of the season.
In between, freshman right-hander Zack Hess threw 1 1/3 scoreless innings.

“Our two freshman pitchers were phenomenal today,” Mainieri said. “Eric Walker pitched another gem for us, and I can’t stress enough how proud I am of Zack Hess for making a sacrifice for the team and moving to the bullpen. It was an unselfish move, and we couldn’t have won the game today without him.”

The Tigers took a 1-0 lead in the bottom of the second inning, when a grounder by Antoine Duplantis was misplayed by Ole Miss second baseman Tate Blackman to allow Jordan Romero to score from third.

Blackman redeemed himself in the top of the third, leveling the score with a solo home run to left field. It was his fifth homer of the season and third of the series.

Greg Deichmann quickly reclaimed the lead for LSU with a solo shot of his own in the bottom of the third inning. The ball landed seven rows into the Diamond Deck in right field. The homer was Deichmann’s 12th of the season and the first allowed this year by Ole Miss starter Ryan Rolison (4-2).

Ole Miss threatened with a runner on third and one out in the top of the sixth, but Walker escaped the inning after Freeman snagged a line drive and quickly fired to third to double up the runner.

The Tigers extended their lead in the bottom of the sixth. Following a double by Nick Coomes, Josh Smith smacked an RBI single up the middle to give the Tigers a 3-1 advantage.

Ole Miss got the run back in the top of the seventh on an RBI single up the middle from Nick Fortes. The two-out hit scored Ryan Olenek, who had doubled.

Smith and Ole Miss’ Will Golsan were the only players for either team with multiple hits. Smith finished 2-for-4 with the one RBI, while Golsan was 2-for-4 with two singles.

After spending the week on the road and playing four games in five days, Ole Miss will have three days off until beginning a four-game homestand Wednesday night against Arkansas-Pine Bluff.

The Rebels will host Missouri in an SEC series beginning Friday night.