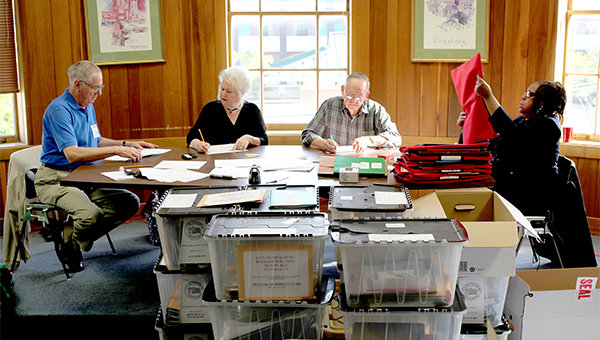 With just over three weeks before the municipal primary election in Vicksburg, candidates are seeking voters from a surprisingly smaller voter pool.

According to voting records, the city of Vicksburg has seen a nearly 23 percent decrease in the number of active voters since the municipal elections in 2013.

According to Elva Smith-Tolliver, with the the Vicksburg Election Commission, the reduction in active voters is due to routine, daily maintenance of the voter rolls.

Sarah Dionne, the chairman of the Warren County Election Commission, said registered voters can be moved from the list of active voters and placed on the inactive list if they notify the commission they are moving.

The commission also routinely checks the newspaper obituaries to see who has died and receives notices from the post office of address changes.

“We want everybody to vote, but we also want to follow it to the law about how we do it,” Smith-Tolliver said. “We don’t want anybody saying we denied them the right to vote. We try everything to try to find these people. To find out where they are living.”

According to Dionne, once a person is listed as inactive, if they don’t vote in two consecutive federal general elections they can be purged from the rolls and will have to reregister.

Someone who is listed as inactive can still vote, but will have to do so via paper ballot because they are not on the rolls. They will then be reclassified as active according to Dionne.

“You can’t let people just continue to stay on there,” Smith-Tolliver said. “If you don’t do voter roll maintenance and cleanup your rolls, sometimes you will end up with more people on your rolls then are actual active voters. You have to clean the rolls and this is done on a daily basis.”

Mississippi also participates in an interstate crosscheck program that notifies the state if a person is registered to vote in more then one state. If it is determined the person has moved from Mississippi, the voter will be listed as inactive.

“We do everything possible trying to find these people trying to make sure we get a card to them at that address so they can tell us they live there and change their information in the system.” Smith-Tolliver said.

Blackburn Motor Company and the Vicksburg Car Cruisers are teaming up to once again host their annual car show Saturday,... read more