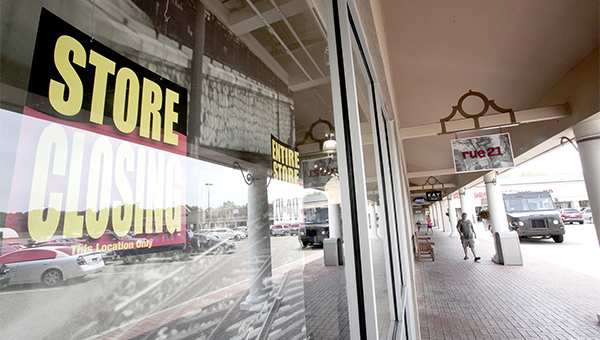 Store closure signs appear in the windows of the Rue 21 location at The Outlets of Vicksburg Thursday.

Store closing signs are up in the windows of the Rue21 store at The Outlets at Vicksburg.

A recent story in the Chicago Tribune reported the owners of the teen clothing store planned to file for bankruptcy soon.

However, Jerry Chamber, manager of The Outlets at Vicksburg, said the store hasn’t advised The Outlets that it is closing.

“We heard the rumors about the bankruptcy, but haven’t heard anything from the company,” Chambers said. He was out of his office for Good Friday and had not seen the signs, recently put up in the store’s windows.

Rue21 staff at the Vicksburg store would not comment and attempts to reach someone at the Rue21 corporate headquarters who could comment were unsuccessful.

Earlier this month, many began believing the company would file for bankruptcy as early as the end of April.

Over the past weeks, media reports have shown a number of store locations announcing plans to close.

Chambers said he is in conversation with a couple of retailers interested in locating in The Outlets, but is not in a position to provide details of those conversations.

“We should know more after Wednesday of next week,” Chambers said.

He said he often receives phone calls from potential tenants who are inquiring as to whether The Outlets is still open.

“The outlet mall is still very much open. We are still involved in many aspects of this community and are working to bring in additional businesses,” he said. “In fact, if anyone has any ideas about businesses they would like to see locate here, please contact us and we will definitely send those ideas up the chain.”

Nearly a quarter of Vicksburg voters have disappeared since…